Authors note: In my How I got into Precision Rifle series of articles, I discussed my journey into precision rifle competition and my various rifle builds. In my last article, I mentioned building a competition rifle in the new 6mm GT caliber. In this article, I discuss the 6mm GT caliber and my rifle build. My next article will discuss loading for the 6mm GT. Stay tuned!

As with all things, precision rifle shooting isn't immune to evolution – especially with its growing popularity. First, it was the .30 calibers, then it went to the 6.5s, and now we're all about sending 6mm bullets faster and faster. 6.5 Creedmoor got necked down to 6mm Creedmoor, 6.5x47mm Lapua got necked down to 6x47mm Lapua, and PRS competitors even started using benchrest cartridges like 6mm BR Norma. Except for the Creedmoor class of cartridges, you will be restricted to handloading, and the 6BR made that relatively simple: throw some Varget behind a 105 grain bullet, and you're off to the races, sort of.

THE GENESIS OF THE 6MM GT

The BR was not designed to be shot out of bolt-action rifles but meant to be single-fed. That led to improvements like 6BRA(Ackley Improved), 6BRX, and the 6mm Dasher more recently. The improvements to the case design in conjunction with modified AICS magazines with 'BR Spacers' were supposed to fix the feeding issues. However, by all accounts, the cartridge was still finicky in a repeater at best, and getting quality brass was challenging.

They set out to find a middle ground between the BR, its variants, and the Creedmoor for competition use. The goal was to shoot a 105-115 grain high B.C. projectile at speeds up to 3050 fps with low recoil and single-digit standard deviations, specifically using Varget (Other powders like H4350 work just as well, or in some cases better). Originally it was a heavily lubed 6.5x47 Lapua case sent through a full-length sizing die, trimmed down on a mini chop saw, and lastly, turning the neck. If that were the only option for brass, I would be out just because of that. Fortunately, there are two offerings for brass: the more affordable Hornady ($0.75/pc) and the more expensive Alpha Munitions ($1.25/pc), both with small rifle primer and standard flash holes. 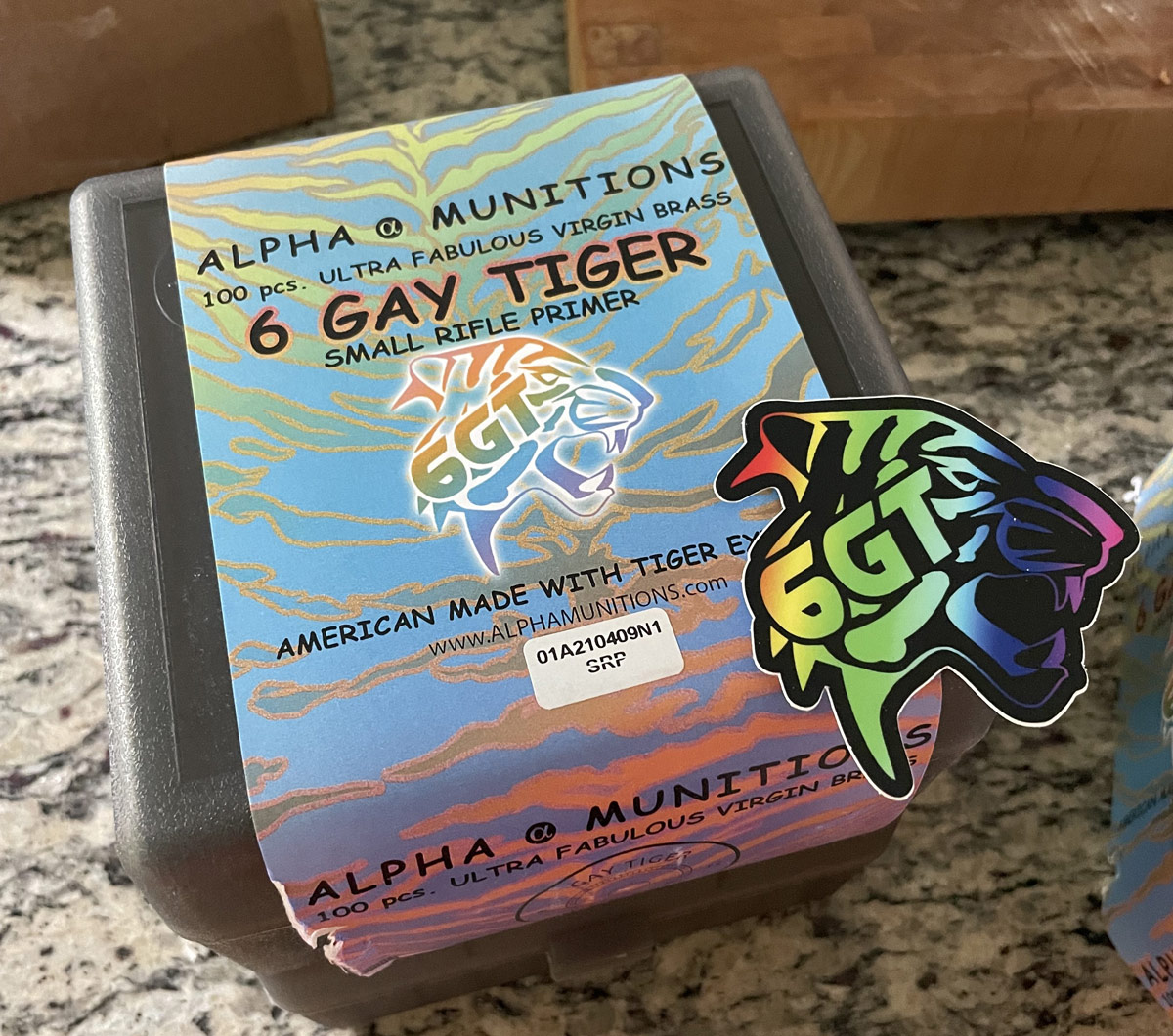 Put all of that in a pot and mix it up, and what you get is the 6mm GT. Contrary to popular belief, GT does not stand for "Gay Tiger," although GA Precision's marketing team has leaned into that pretty hard. It was just a coincidence that it became popular around the same time as Tiger King. The GT stands for George and Tom, sorry to disappoint. I personally like Gay Tiger better; it brings some character to the cartridge.

Since this is going to be my competition rifle, I knew going into this build was that I would be using the MDT ACC chassis as the base. For the action, I ended up choosing Black Heart International, which is a rebranded Stiller Tac-30. In other words: a custom Remington 700. It came with a benchrest trigger on it that was crisp but too light. I replaced it with Geissele's Super 700; I'll speak more about that in a little bit. We used a Bartlein heavy varmint barrel and an Area 419 Hellfire brake topped off with a Leupold Mark 5 HD 5-25x56. 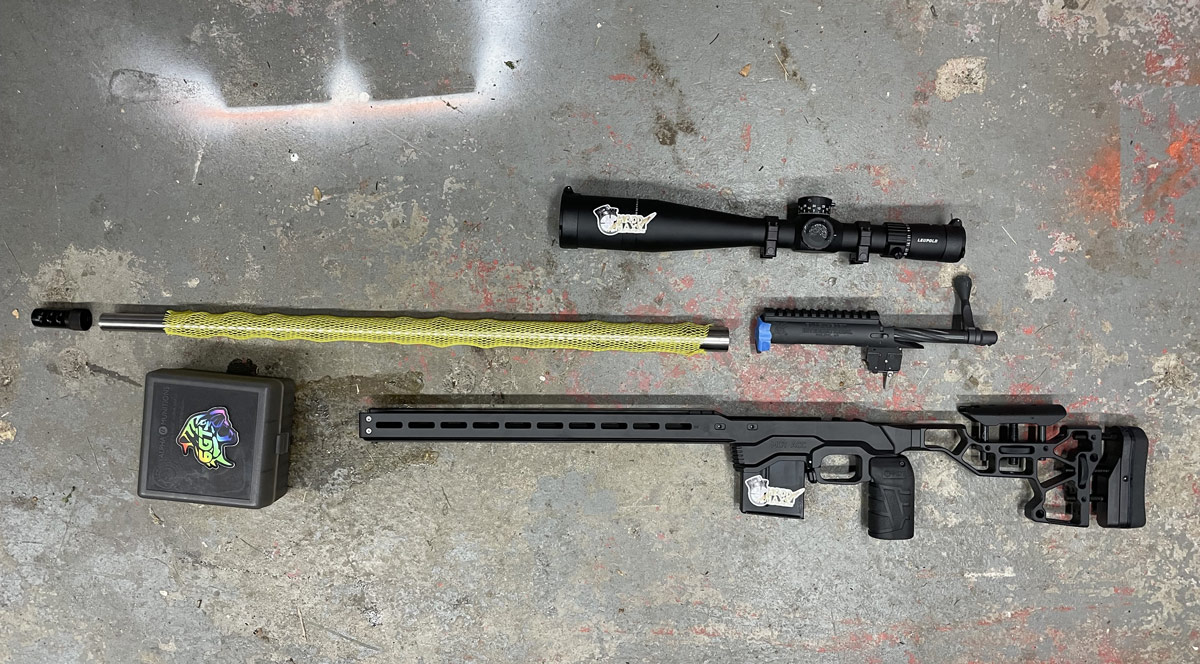 The Super 700 is a one-stage or two-stage trigger that comes pre-set at 3.5 lbs. The Super 700 can adjust to 8 ounces, though Geissele does not recommend going below 2 lbs. for safety reasons. Changing it to a single stage was giving me issues with the over-travel adjustment. It felt more like a rolling trigger analogous to the Three-Gun and Rapid-Fire triggers from Geissele. I was almost ready to get rid of it and move on to a Trigger Tech Diamond. After going back in and thoroughly reading the directions, I was able to tweak the over travel adjustment just enough to get a very crisp 15 oz single-stage break.

I'm not going to go too in-depth here. My gunsmith, Bill Marr (RifleShooter.com, 782 Custom Gunworks), did a full write-up on it that could be read here (https://rifleshooter.com/2021/07/building-a-custom-6gt-rifle/). We spun the barrel up, I went home, assembled the rifle, and went to the range. 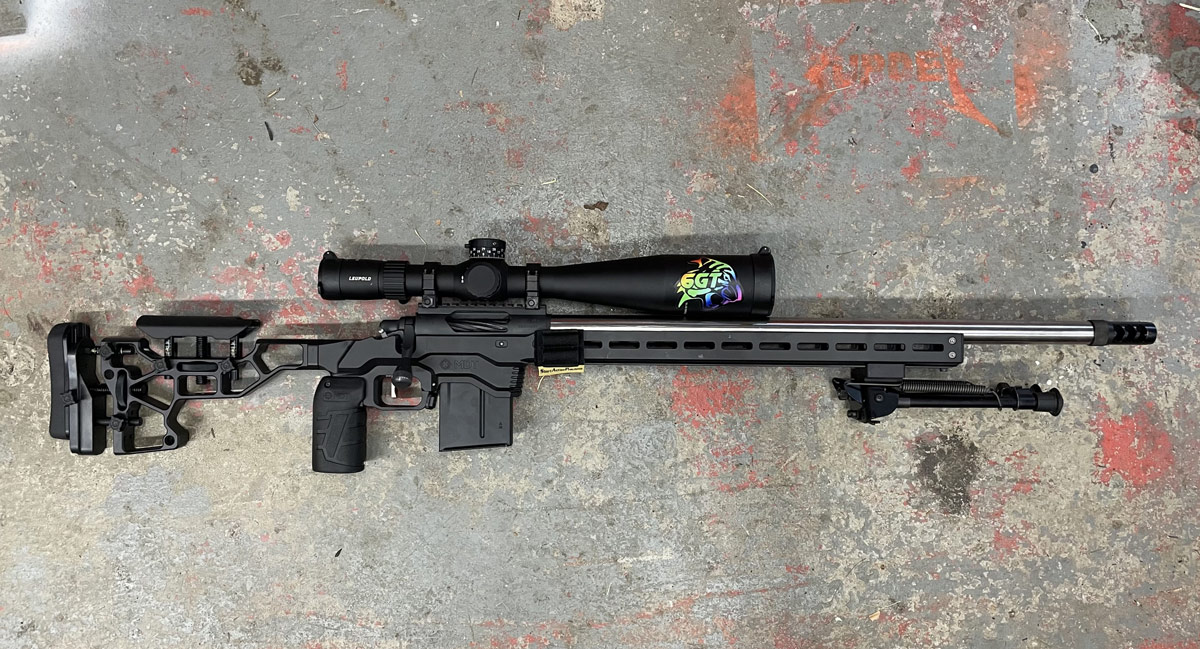 I had 100 rounds loaded up with 108 Bergers and 105 Lapua Scenar-Ls with a couple of different powders – N140, Shooters World Precision, H4350, Staball 6.5. Most of the shooting was done to get the first firing out of the way so more precise load development could be done. A couple of arbitrary safe charge weights were sent downrange in 10 shot groups while cleaning in between rounds for five rounds, then every three rounds for 15 rounds, and lastly, every five rounds for 15 rounds. The remaining 60 rounds were shot, and the rifle was thoroughly cleaned again. 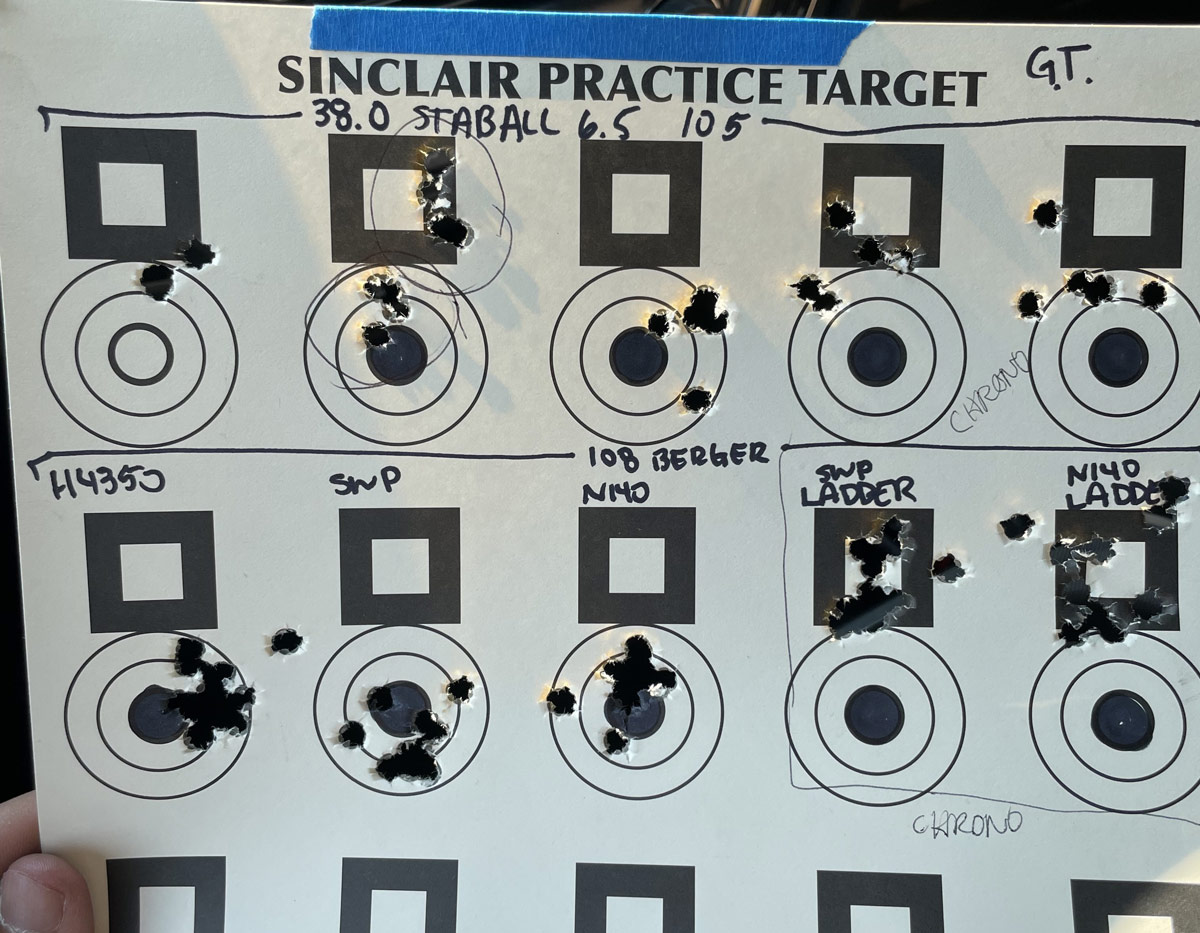 The ten shot groups at 100 yards with no load development showed a lot of promise; they were all sub-inch, while a few were in the ¾ inch range. This made me excited to begin actual load development.

The winning powder ended up being N140, which is essentially Varget, which is why I chose it in its absence. Luckily the world is slowly getting back to normal, and powder is gradually becoming more available. The 108 Berger BT Target are getting pushed at roughly 2975 fps, and the 105 Lapua Scenar-Ls are getting pushed around 3030 fps with SDs in the mid-low single digits. On average, the groups are ½ inch but regularly under the .400-inch mark. 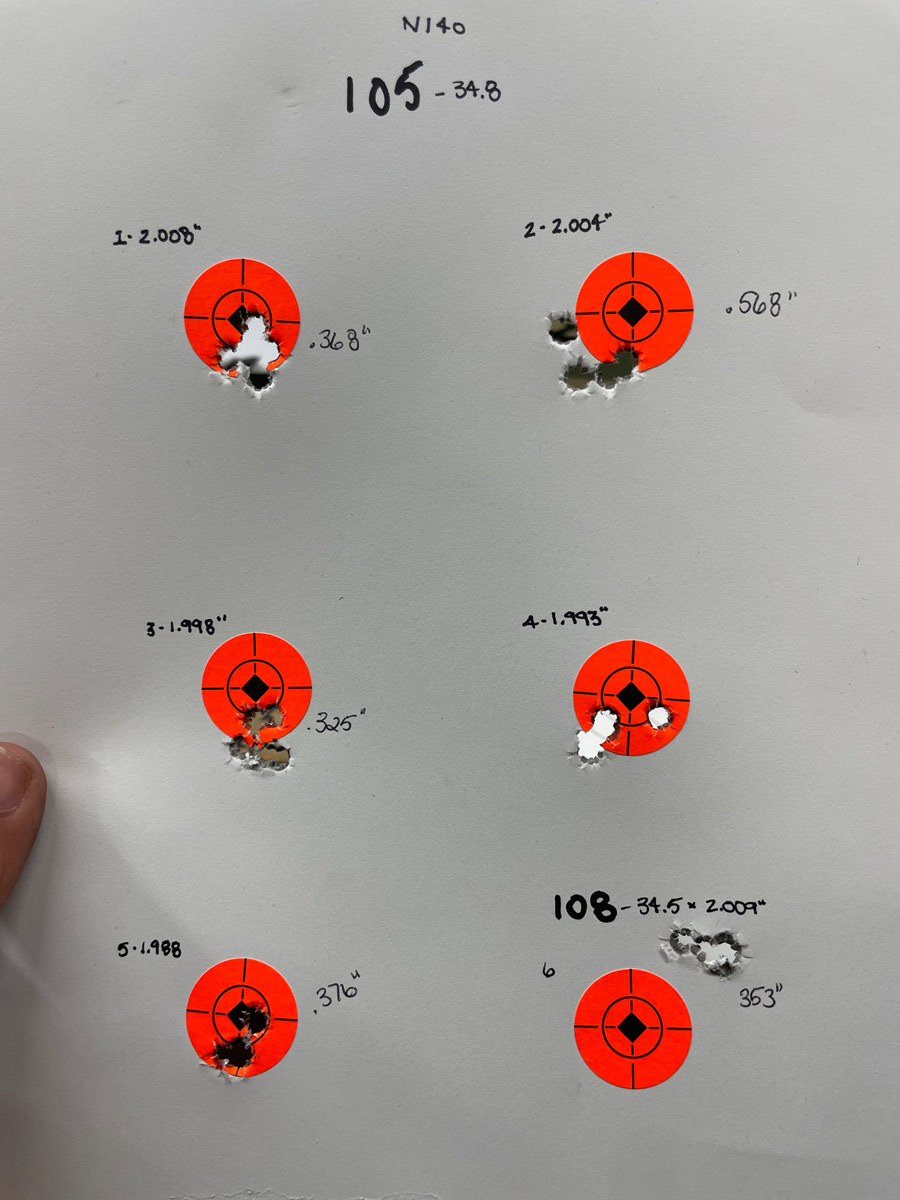 I am pleased with the accuracy and precision performance of the 6mm GT. But did it fulfill its promise to improve on the Dasher? You bet. There have been no feeding issues, the recoil is light and smooth, and with the low powder charges, barrel life should be well beyond the 2,500 round range. 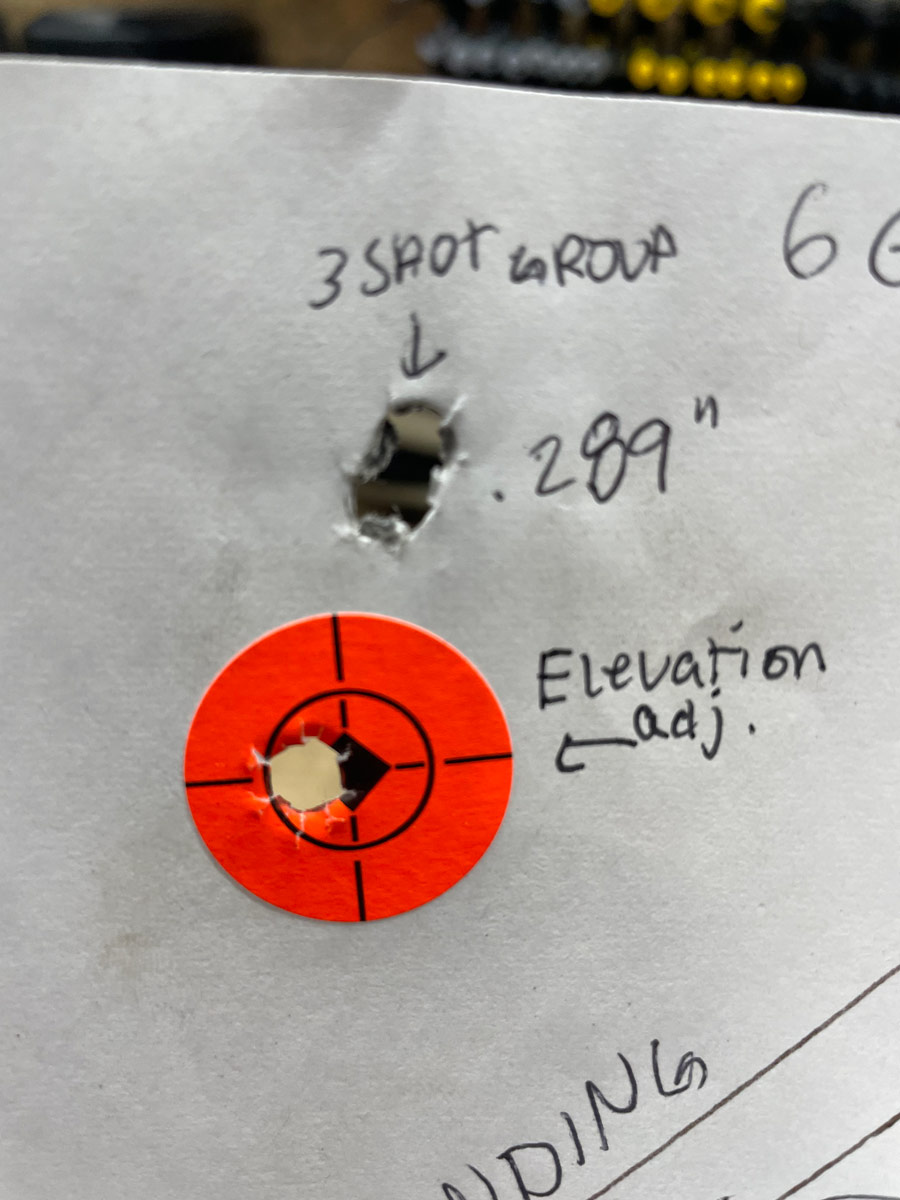 I plan to swap stuff the brake to the Area 419 Hellfire Match, essentially a 4-port version of the Hellfire. Along with that, I would like to add a Trigger Tech Diamond when I find one on sale. Lastly, I will add some MDT weights to the chassis to balance it out and help minimize the recoil to almost nothing. I will be shooting this rifle for the remaining two matches for the 2021 season and will write a follow-up to this once the season is over.

So do I think the 6mm GT is a gimmick that will be forgotten about for something new and improved within a few seasons? No. The GT is here to stay. Stay tuned for my next article, where I take a deep dive into loading the 6mm GT!