Until recently, I had never owned a fully custom-built rifle. The cost had always been somewhat prohibitive, and my abilities behind my other rifles had never justified the price. Most of all, the infinite possibilities when building one were honestly a tad overwhelming. I had convinced myself that my off-the-shelf rifles were more accurate than I was, and spending thousands of dollars more would not translate into significant gains in my shooting. While I wasn’t necessarily wrong in that assessment, I could not be happier with my decision to pull the trigger on a fully custom rifle build.

When I finally decided it was time to get started on my build, I followed the standard advice I give to all my friends and students...first, figure out what you want to do with your rifle and THEN shop for something to fit that role. I did, however, go a bit off the traditional path regarding custom rifles. From my experience, when people get a custom rifle, it is built to exact specifications to be extremely good at one thing, be it a competition setup, a “tactical” configuration, or anything in between. 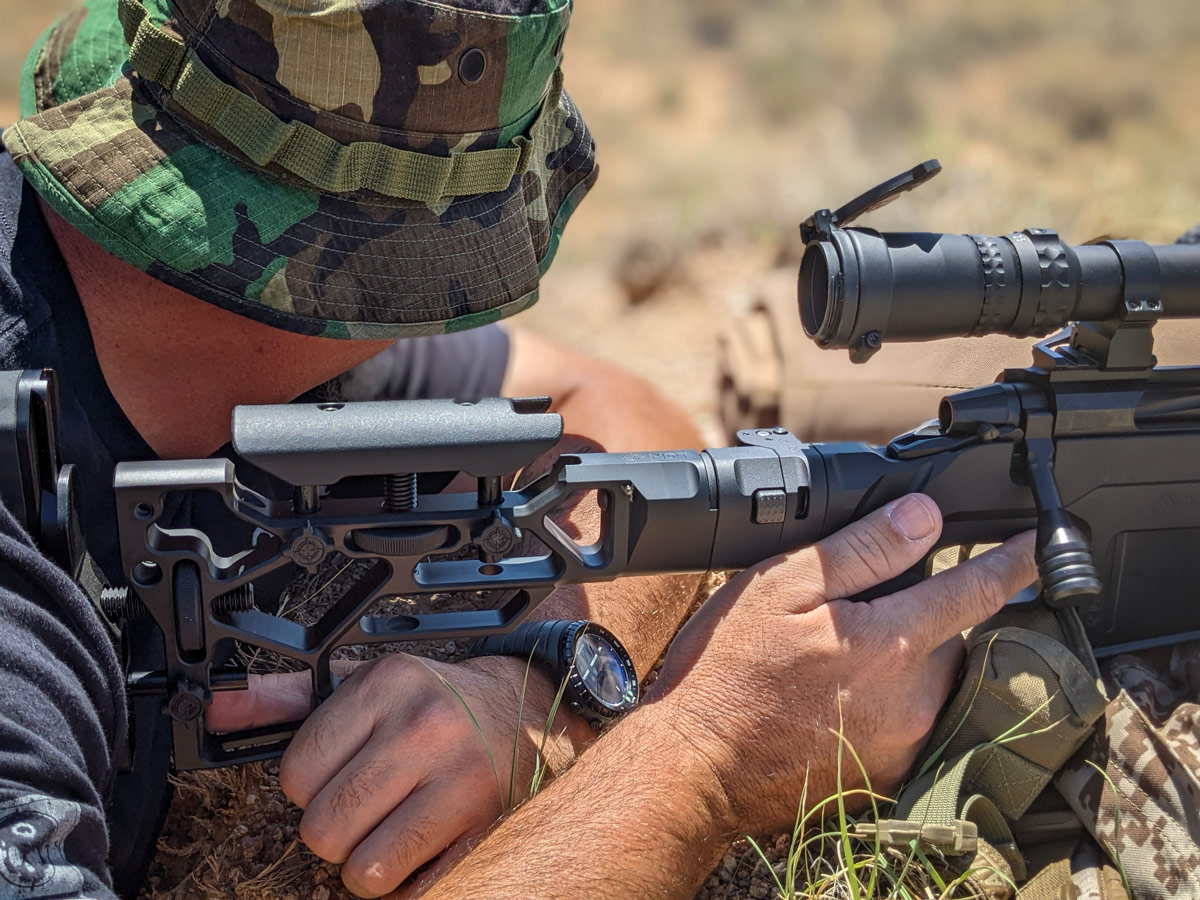 I chose the Folding Stock Adapter from MDT. With the stock folded the rifle system is very easy to pack up and carry.

For me, versatility was the goal. I wanted a “Jack of All Trades .” Typically, when we think of the Jack of All Trades, the following phrase “...is a master of none” comes to mind, and to an extent, this is true. When we try to “do everything” with a rifle, we sacrifice performance in certain areas for others. A heavier, longer barrel may lead to better accuracy at distance because you can extend transonic range, but then we sacrifice portability, etc. However, it was the second and often less known part of the saying that I was interested in. The full quote reads: “A jack of all trades is a master of none, but oftentimes better than a master of one.” With this in mind, I set out to build my “Master of None.” What would I use this rifle for? In a word, everything. It would be my training rifle for teaching students long range shooting, and it would also be a hunting rifle. I would use it for testing out muzzle brakes, scopes, bipods, and suppressors.

There were a few characteristics that I chose to focus on that helped to guide me on my journey. First, I wanted a powerful caliber. Not necessarily an anti-material round, but something capable of doing more than just putting holes in paper or ringing steel. Second, it needed to be manageable, both in terms of weight and size, as well as recoil. In this sense, I was concerned with the final overall package. Not just the weight of the rifle itself, but with the optic and any other accessories I was going to have on it. I wanted it all nestled in a chassis that would look awesome and work well with my overall design goal. Lastly, I wanted this thing to be durable. This was not going to be a safe queen that only came out to show off at the range. This was going to be a hammer. Some features were non-negotiable. I wanted a folding stock, a chassis, and a suppressor. Beyond that, I was flexible. 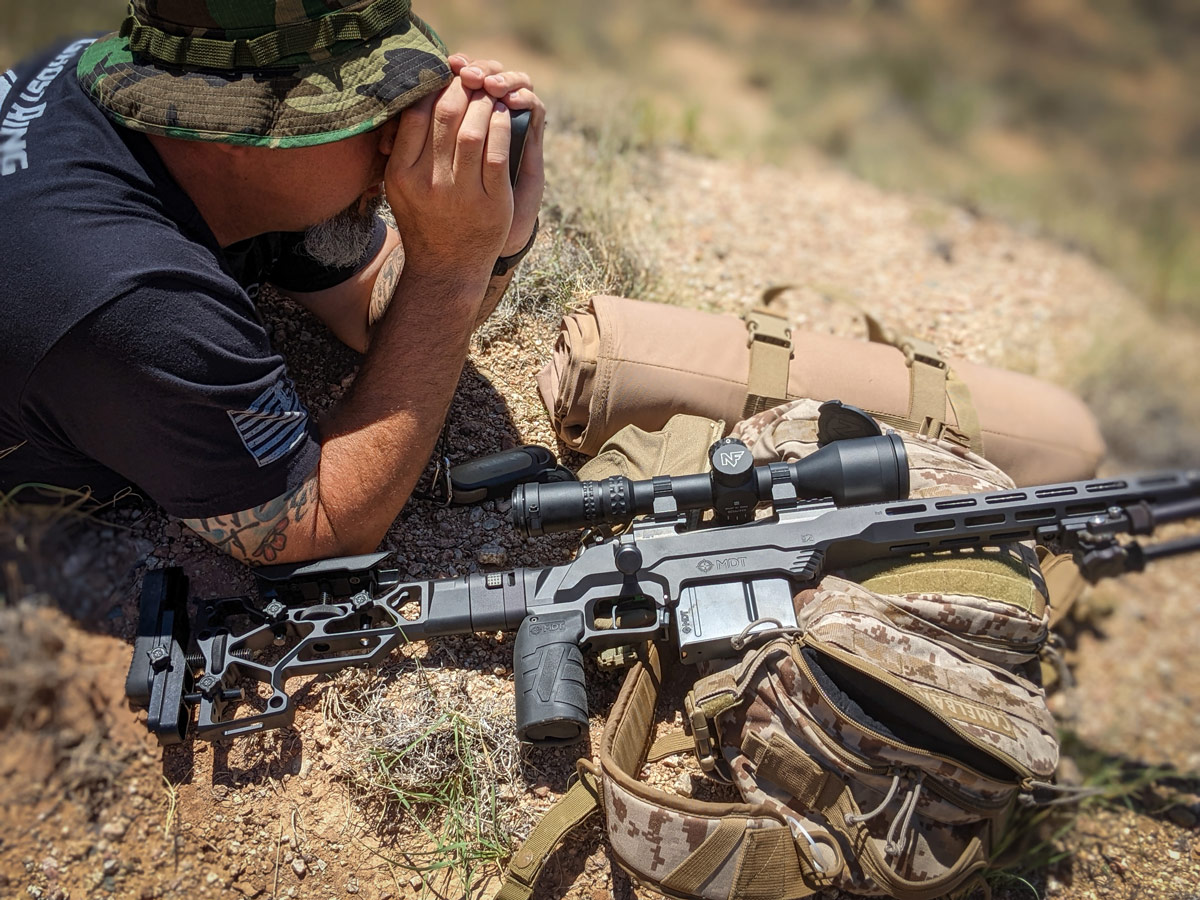 As with many things, you ask ten people what the “best rifle caliber” is, and you will get ten different answers. I spent significant time scouring forums, talking with mentors, reading articles, and digging through reloading manuals, before finally landing on my caliber of choice. Ultimately, the 300 Win Mag, or .300 Winchester Magnum was my cartridge of choice. The 300WM can bring upwards of 4000 foot-pounds of energy to the target, it is a relatively flat shooting round, it has a venerable pedigree including wins at various competitions, and it has been employed in numerous conflicts around the world as a capable sniper round. These benefits far outweighed its deficits in my mind. The 300 Win Mag is known for being a heavy recoiling round. In a lighter overall setup, this could be a potential issue. Also, I have been told it is difficult to reload, as it is a belted cartridge. Already we can start to see the give and take I spoke of earlier, but more on that later. 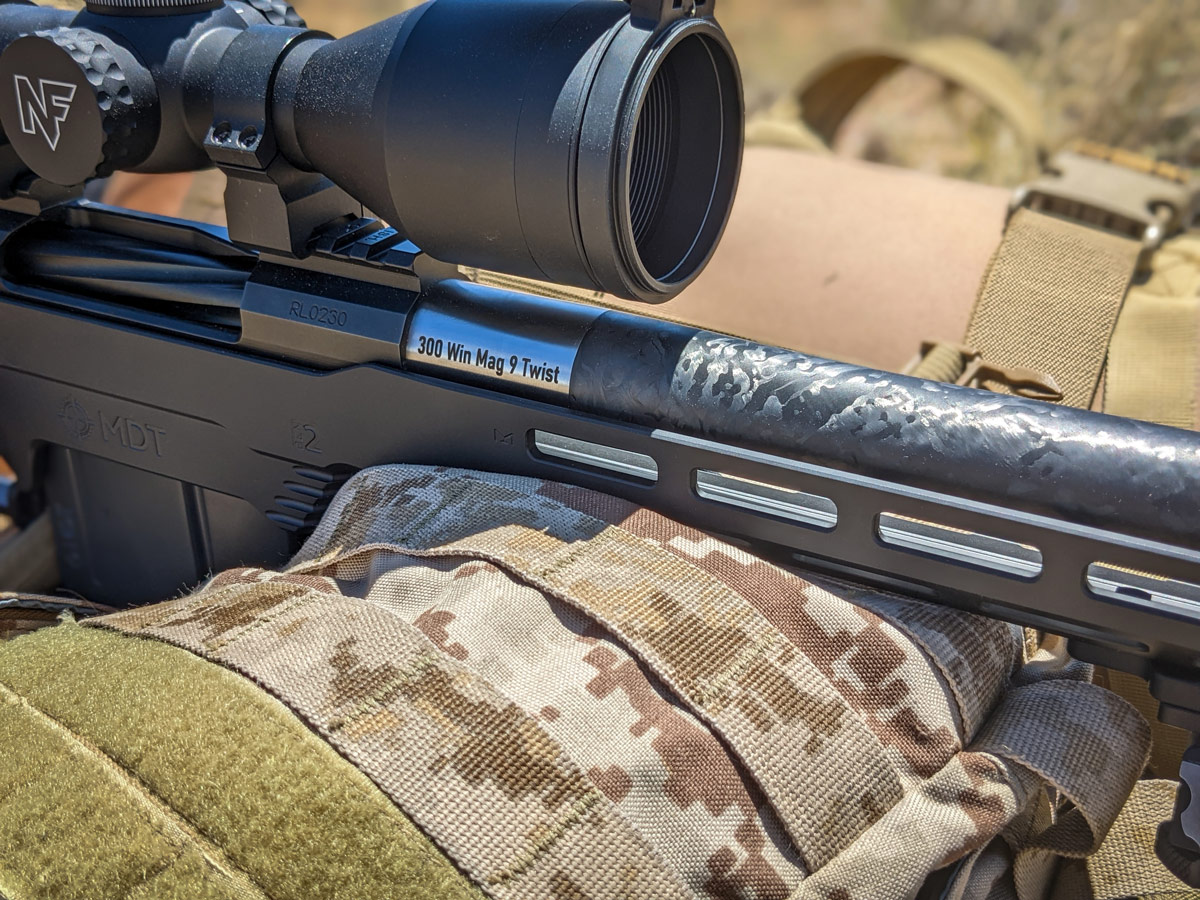 Now that I had a caliber, I needed to find someone to bring this project to life. For this task, I chose Straight Jacket Armory. They are a Wyoming-based gun builder. Besides numerous recommendations, two specific things stood out to me, making them my final choice. Sure, these could be dismissed as a marketing tactic, but they resonated with me. When you go to their website and look at the “About Us” tab, the first thing you see isn’t about their rifles or any of the products they sell or produce...it’s about customer service and communication. This was HUGE for me. The second was their background and associated quest to build lightweight, highly accurate, affordable rifles.

For the barrel and action, I chose an Impact Precision 787R action mated to a 24” Proof Research Sendero carbon fiber barrel with a Trigger Tech Diamond 2 stage, flat trigger. The basis of my choices here was guided by my initial plan for this rifle. I went with the Impact Precision action for a couple of reasons. I liked that the receiver was a single piece with the 20 MOA picatinny rail milled on. This would eliminate any chance that a scope rail would ever come loose under the recoil of the 300WM. It is also patterned off the long action Remington 700 footprint, which ensures many options for things like chassis and triggers. As for the barrel, the overall weight savings, and if I am being entirely honest, the looks of the carbon fiber made the Proof Research barrel an easy choice. Finally, the trigger. I have always had a bias towards flat-faced triggers and have been shooting Trigger Tech triggers on other rifles I own. I typically prefer a single-stage trigger on my precision rifles and a 2 stage trigger on my carbines. Still, I opted for the 2 stage for this build. 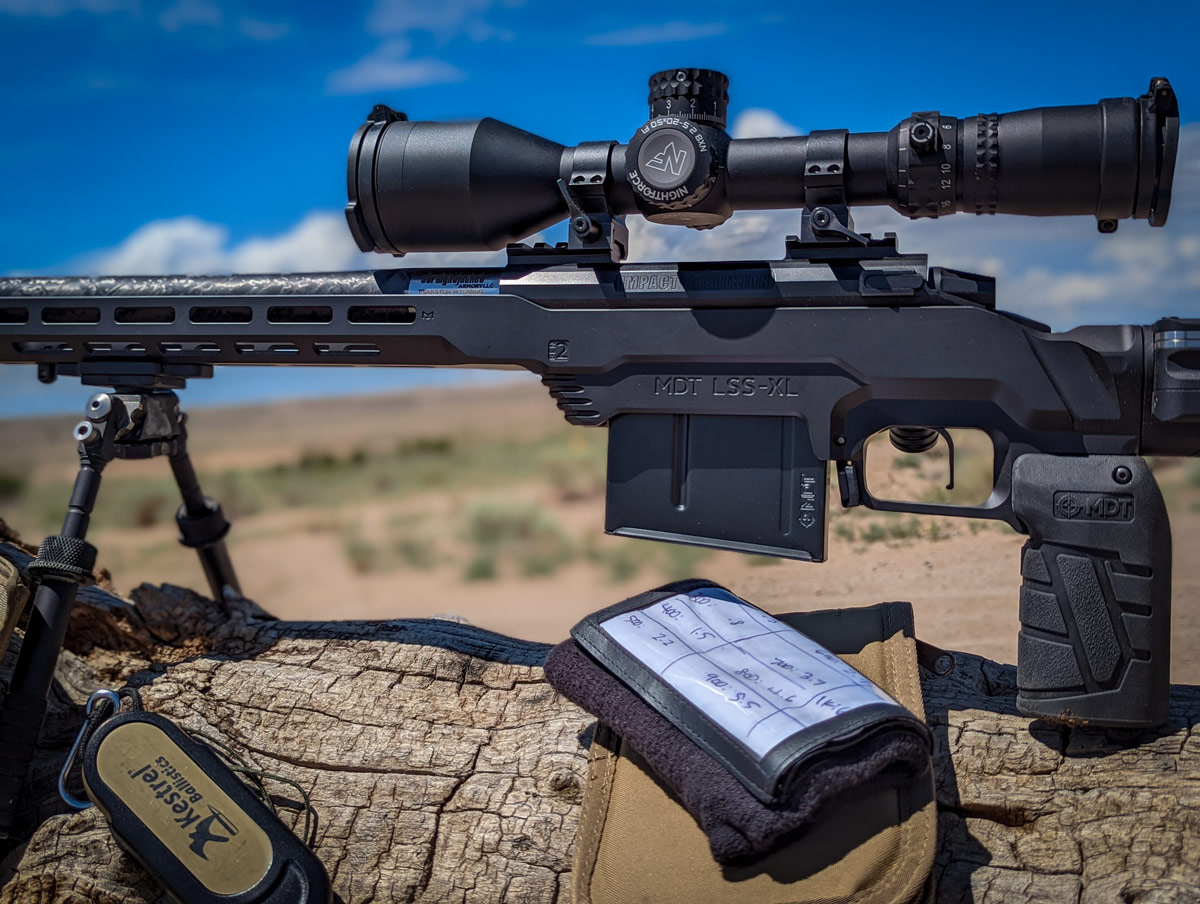 Once the heart of my custom rifle arrived, it became immediately apparent where the “extra” cost came into play. You are paying for the craftsmanship, quality of the parts, professional knowledge, and experience of the gunsmith that put this rifle together. This translates into supreme confidence in your rifle. To know this was not just slapped together on some assembly line, packaged up, and shipped to your big box store. The attention to detail and care put into this build shows through. 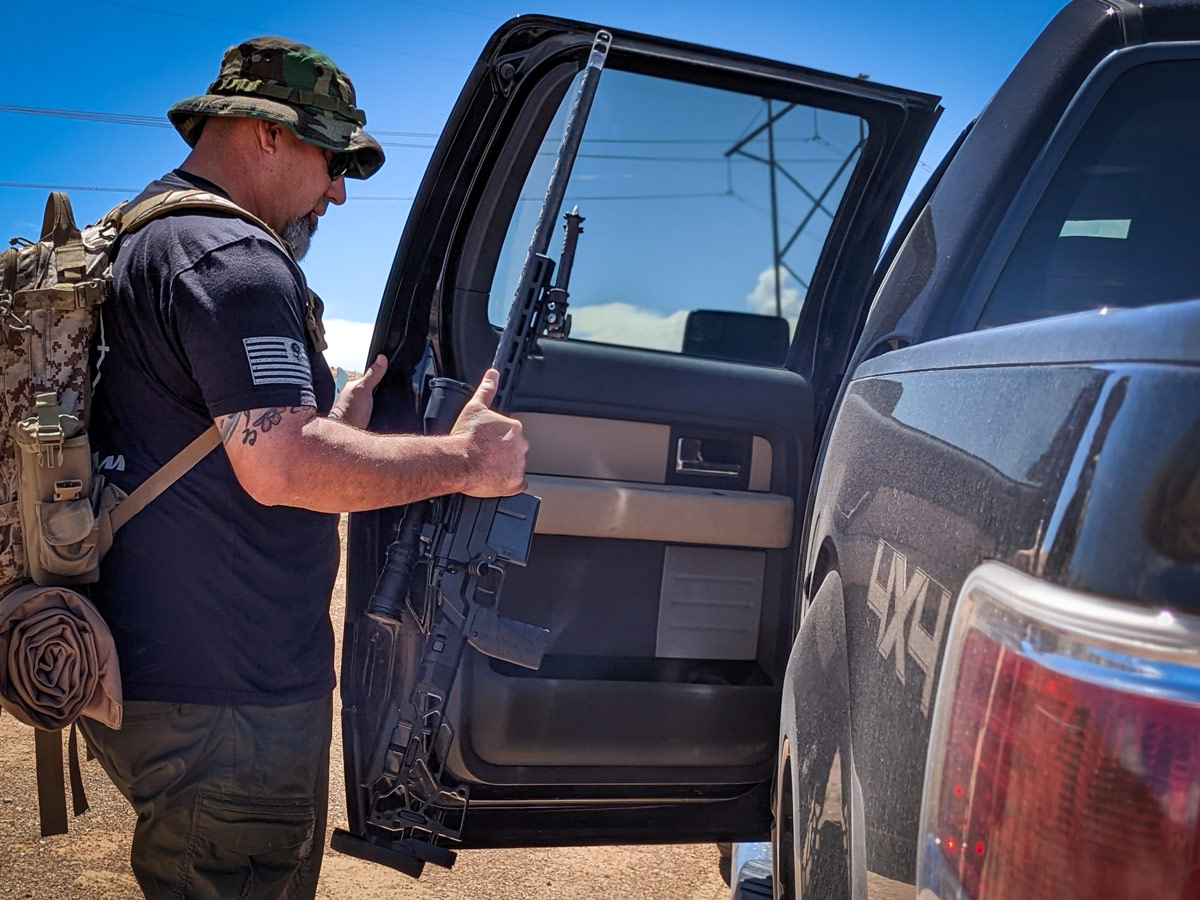 A lot of capability in a compact package.

I chose the MDT LSS-XL Gen 2 chassis system, in black, to cradle the barreled action. I decided on the MDT chassis simply for its unsurpassed modularity. It will allow for any AR-15 style buttstock and pistol grip and is compatible with industry-standard M-Lok accessories. I opted to utilize the MDT Short Skeleton Rifle Stock in combination with the 2-way locking, folding stock adapter, and the MDT Elite Vertical grip. The LSS-XL Gen 2 uses industry-standard AICS magazines, is CNC machined from a single piece of aluminum, features an integrated, ambidextrous thumb rest, and weighs around 2lbs. 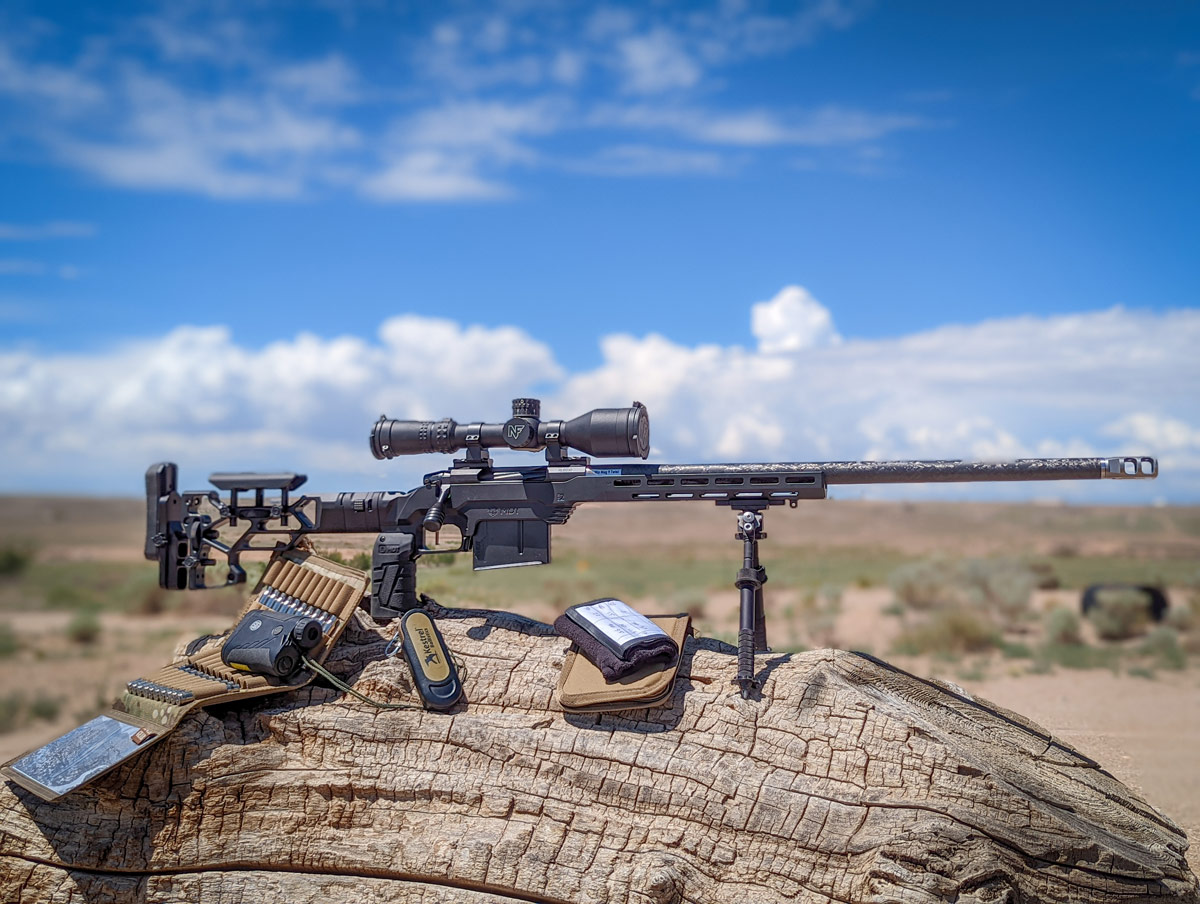 Everything you need for long range work. A great looking rifle! 300 Winchester Magnum is capable of shots well past 1,000 yards.

Now that the rifle was complete, it was time to put on the finishing touches. Again, staying with the driving tenants of versatility, durability, and being lightweight, I began to look at optics. I quickly landed on the NightForce NX-8 2.5-20x50 with the first focal plane Horus Tremor3 reticle. The initial low power magnification and decent maximum zoom ensure good versatility over a wide variety of shooting conditions. Coming in at 12” overall length and at just over 28oz total weight, combined with an industry-leading reticle and being the choice of USSOCOM and other discerning, highly reputable organizations, it was an easy and logical choice. 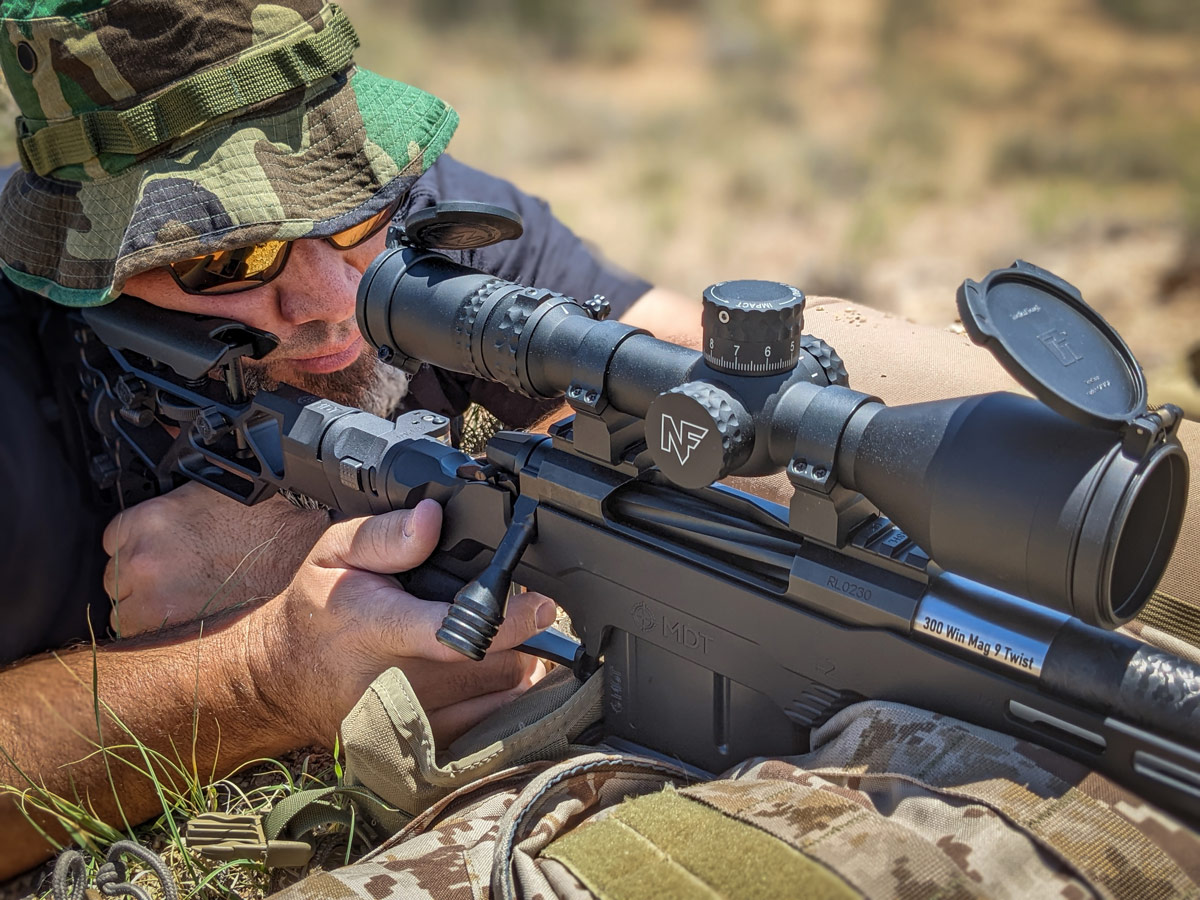 The NightForce NX-8 is right at home on this rifle.

I use the B&T Industries ATLAS Accushot Bipod on all of my rifles; while it’s not the lightest bipod on the market, it fits perfectly within the concept of this build. I had considered the BACKLANZ Carbon bipod, but at a price tag of just over $700, it seemed a tad excessive for 5oz-ish weight savings. 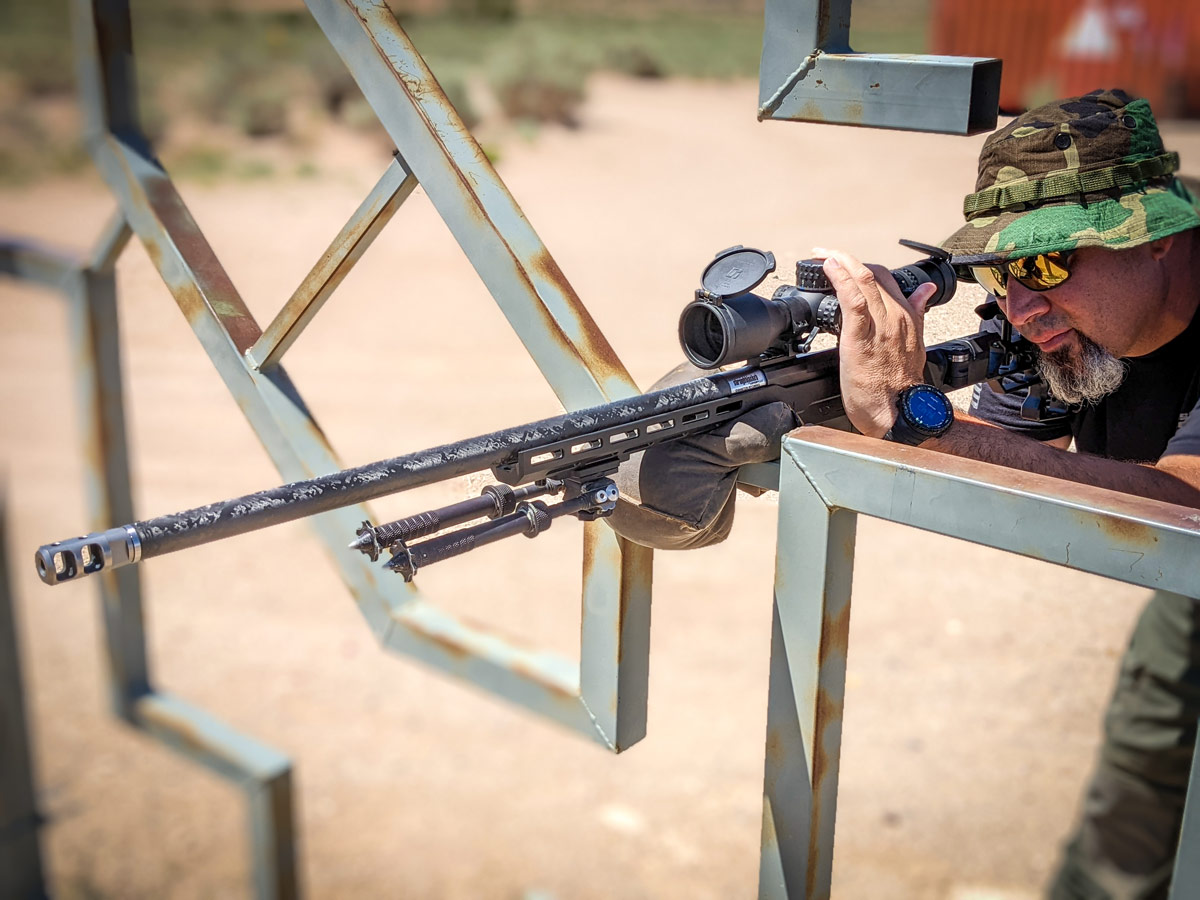 Shaking out my custom 300 Win Mag rifle on a competitive stage. The muzzle brake is necessary considering the 300 recoil and weight.

When it came to the suppressor, I chose the Gemtech Tracker. Coming in at just over 11oz, it will stay within the parameters of this build. According to Gemtech, while it is 300 WM rated, it is “intended for hunting purposes only .”This means you must let it cool to ambient temps after 10 rounds. While this may fall outside the definition of “durable,” I cannot see a scenario where I would need to put 10 rounds of 300 WM through this rifle in rapid succession.

Well...what can I say? I absolutely LOVE looking at this thing all put together! I could not be happier with the overall build. The total weight comes in just over 13lbs. After some adjusting with the MDT buttstock, it fits like a glove. I was concerned I may have made a mistake going with the short buttstock over the full-length one, but the length of pull is perfect. In my excitement and haste to get this all put together, I did make one critical error. I have never owned a rifle without a full Picatinny rail on top. As such, I purchased a SPUHR mount for the NX-8 without considering the separate integrated pic rails. I will need to go with separate rings for the NX-8 as the footprint of a single-piece mount is not compatible with the split rail design of the Impact Precision action. Secondly, with the NX-8, the front mounting length is only 1.3 inches. This does not leave a lot of wiggle room in terms of getting the eye relief right, but with a dual ring setup, it shouldn’t be too much of a problem.

The MDT LSS XL Gen 2 Chassis Systems is one of the most versatile chassis on the market. It's light enough to serve a hunting chassis, but has all of the modularity necessary for tactical and long range work. I will be doing follow-up articles over the coming months and years where I shoot out to distance, use the rifle for demonstrative purposes during training, go hunting, and discuss load development. I am excited to really shake out this rifle. Thank you.

Micah Noe, COTA/L (@jolly914), spent 11 years in the United States Air Force working in Combat Rescue and deployed to Afghanistan 5 times. Micah splits his time between the Healthcare and the Firearms industry. He teaches for Ghost Ring Tactical in San Antonio, NM, and is the CEO and Founder of High Desert Training Partners. He is also the COO for Berserker Creative, a Utah-based media production company specializing in the outdoor/firearms communities.