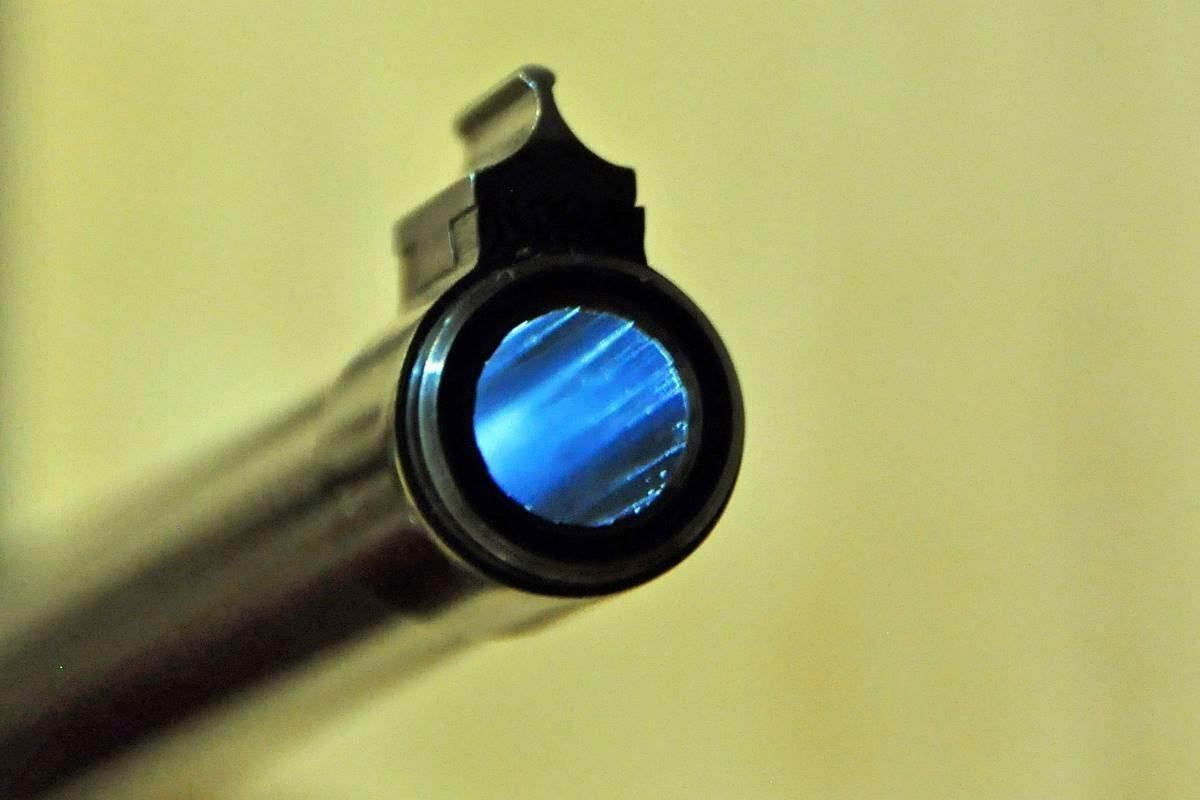 Before COVID shut down the world, I wandered the aisles of a gun show and saw an interesting rifle on a dealer's table. I stopped to look and noticed another browser that was also examining a used rifle. As part of his examination, he removed the bolt, pointed the barrel at a ceiling light, and proceeded to squint through the bore. His study didn't last long, and he left before I did. Once he was out of earshot, the used gun dealer behind the table muttered to his partner, "I don't know why anyone looks through barrels. It's useless. You can't see anything anyway."

This dealer was dead wrong. I considered taking the time to educate him, though I felt my efforts would have been in vain.

I don't know if the gentleman gazing down the barrel knew what he was looking for, but you can learn a lot by examining the bore of a firearm. Let's look at some reasons why you would want to look down the bore of a rifle and some of the tools available to make the job easier.

The first reason to look down a bore, especially if a firearm has sat for a long time, is to look for an obstruction.

To check for obstructions:

- Start by opening the chamber and physically and visually make sure the firearm is not loaded.

- Remove the bolt or partially disassemble the gun until you can see down the barrel from the breach side.

- Point the barrel towards a light source and look for barrel obstructions like spider nests, stuck wads, and bullets that didn't make it out the barrel.

Shooting a firearm with a barrel obstruction can destroy the gun and send you to the local emergency ward. Checking a bore for obstructions before heading out the door is an excellent habit to cultivate and takes very little time.

IS YOUR BARREL CLEAN?

Unlike wear or corrosion, bore cleanliness is easy to spot by simply looking through the barrel. Powder residue and carbon are easy to spot with the naked eye, while copper fouling will require a borescope. Heavy fowling can easily be removed, so it's usually not a severe issue.

IS YOUR BARREL BENT?

Looking down a barrel can determine if the barrel is bent or not. Unfortunately, barrels are surprisingly easy to bend. I learned this the hard way when a heavy varmint barrel I'd just removed from an action rolled off the bench and landed on a concrete floor. That short drop put a slight bend in the heavy barrel and turned it into scrap. Most barrels are bent in hunting incidents and often involve a fall. A gunsmith once told me the use of off-road vehicles for hunting and the subsequent crashes involved gave him a steady stream of business. Fortunately, barrels with minor bends are safe to shoot, and they may even shoot reasonably well. However, if it's a bent shotgun barrel, hitting anything can be a real challenge. 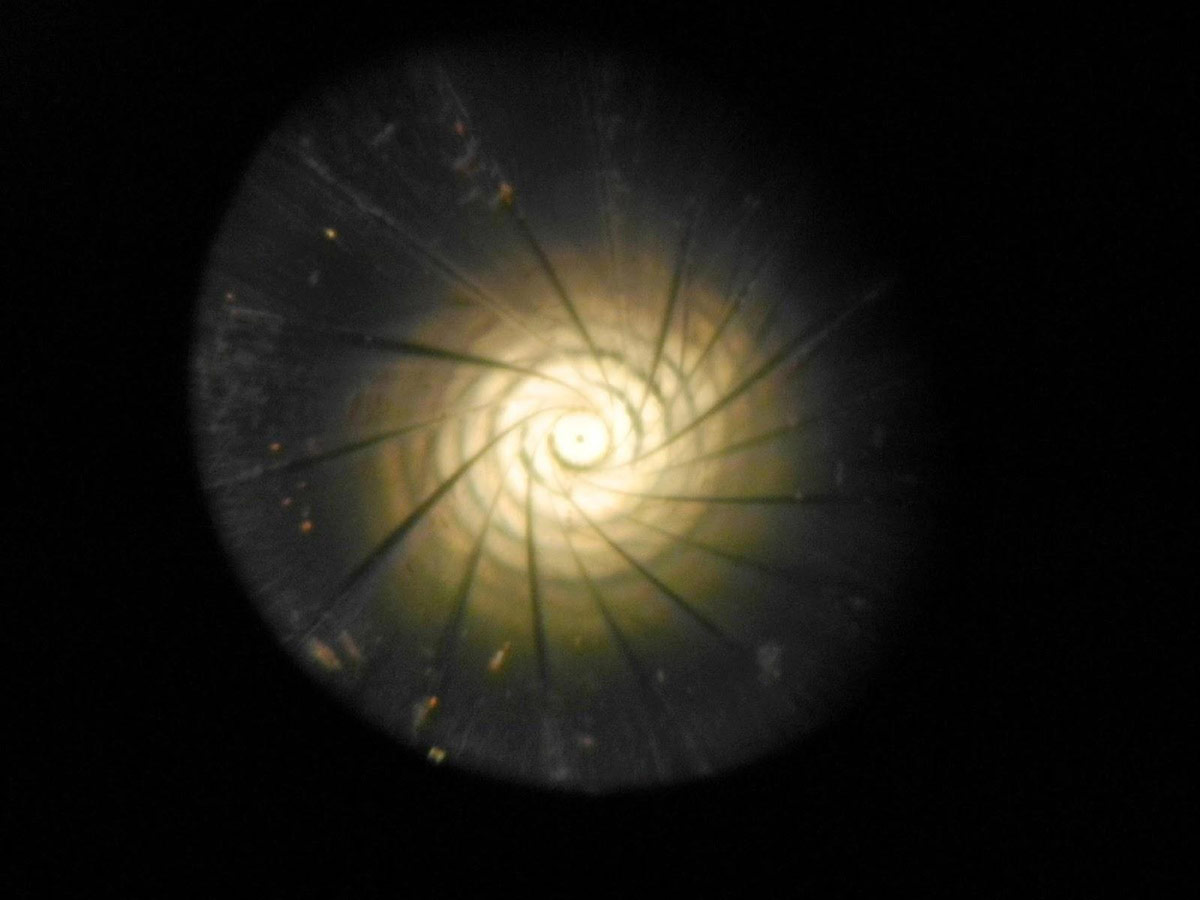 Ignore the rifling and look at the concentric circles to determine if the barrel is bent. This one's straight.

Bends are typically subtle and challenging to detect from the outside; however, they become apparent when you look through the bore.

Looking through any hollow tube at an even light source will reveal what appears to be concentric circles of light and dark along the wall of the tube. If the bore is straight, these circles will appear perfectly concentric when the eye is centered. But if there's a bend in the barrel, those circles will not appear even or concentric. When buying a used firearm or a new one, a careful look down the barrel will reveal if it's bent and potentially save you some money.

Looking down a barrel can reveal corrosion, which can have disastrous effects on the accuracy of the firearm. To check for corrosion, you will need to illuminate the inside of the barrel. An excellent tool for this is a bore light. Bore lights are nothing more than small flashlights with a plastic "light-bender" attached. Bore lights work great and are usually inexpensive.

Corrosion and pitting will appear as dark spots inside the barrel. If they are visible to the naked eye, the barrel is in bad shape. Minor to moderate pitting will not be visible, although it can often be seen just inside the muzzle near the crown. 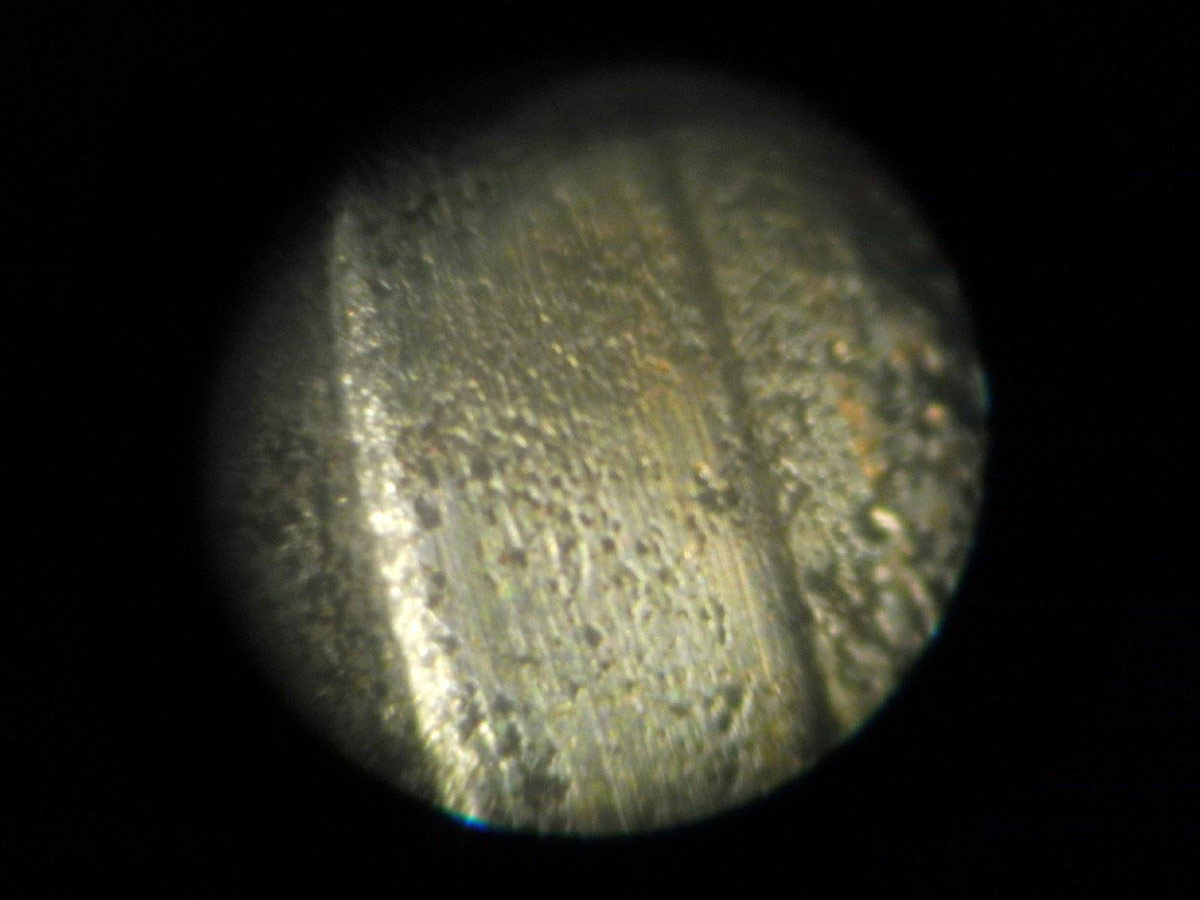 Pitting in the bore of an old Winchester 1894.

Normal wear can be challenging to spot. Like corrosion, it must be bad before being visible to the unaided eye. The rifled area immediately in front of a rifle chamber is a great place to look first. You may see little distinction between the lands and grooves, and the metal will typically look darker. The bore must be clean. If this area is badly fouled, it will be difficult to judge this part of the bore. 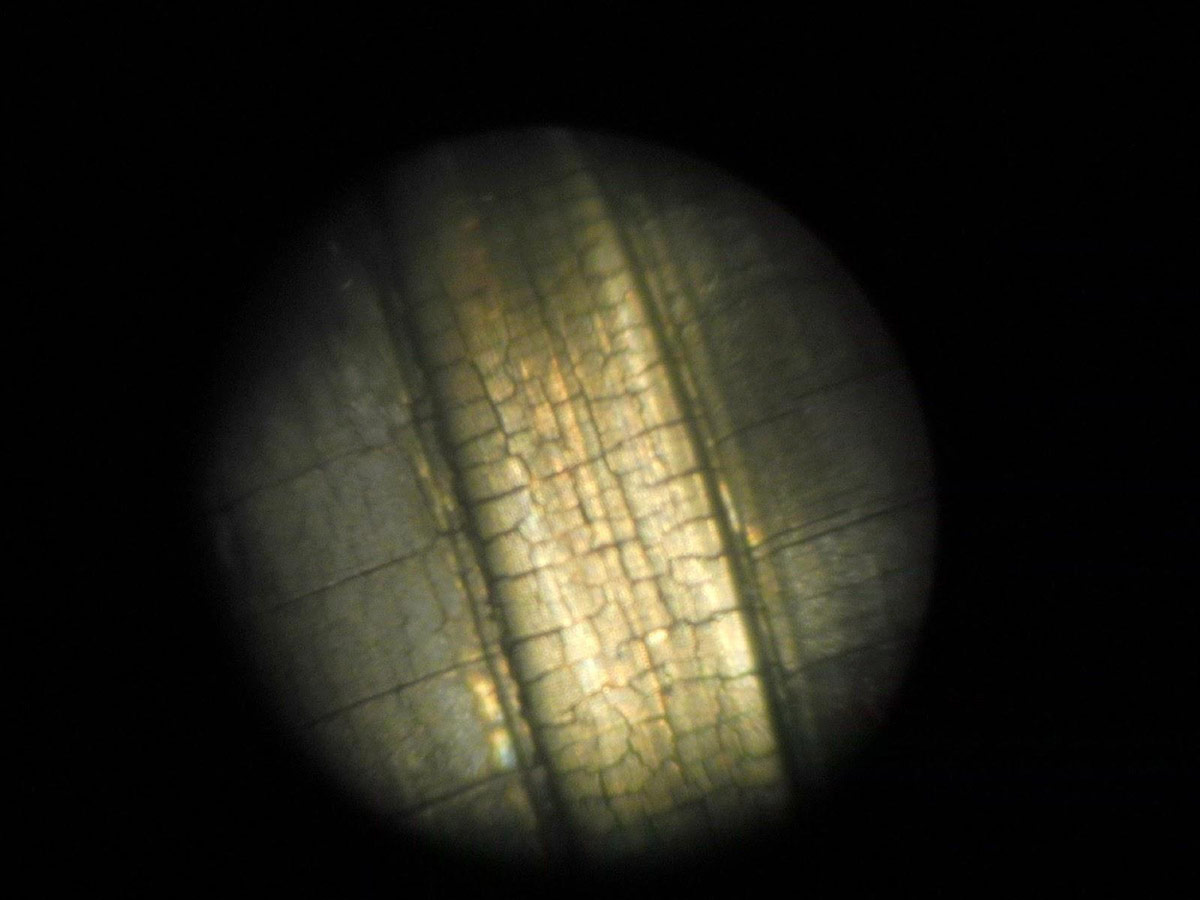 Fire-cracking near the chamber of a 7mm Remington Magnum.

To properly inspect a barrel's interior, you need to use a borescope. Borescopes are optical devices that send light down the barrel, illuminating the bore and direct it back to an eyepiece, where it can be viewed or photographed. Borescopes are steadily getting better and cheaper. Thanks to fibreoptics and smartphones, there are versions available for less than $50. However, the gold standard in borescopes is the Hawkeye, manufactured by Gradient Lens Corp. This borescope will cost around $1,000 US but are top of the line. All the bore images in this article were taken using the Hawkeye scope from Gradient Lens Corp. 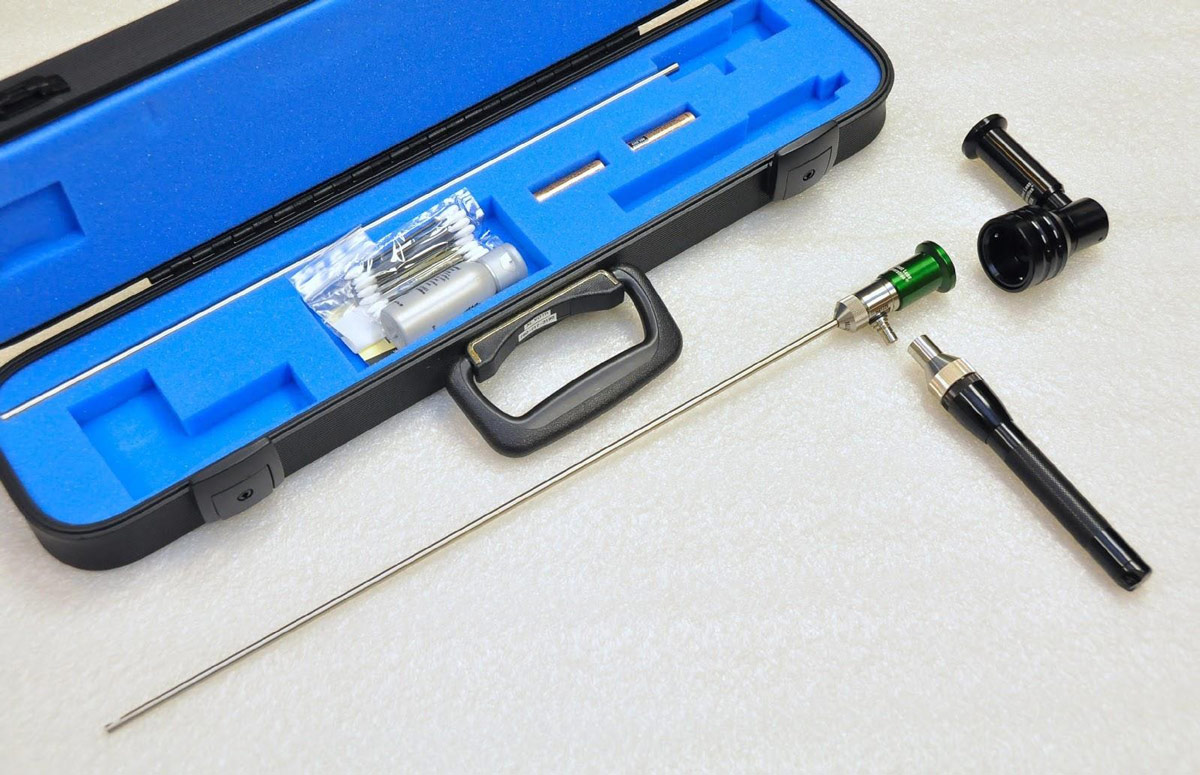 Borescopes allow you to examine every inch of the barrel.