The MDT XRS Chassis system combines a traditional rifle stock form-factor with the features and modularity of a chassis. The MDT XRS chassis system is perfect for general precision work, PRS/NRL competition, and hunting. MDT launched the XRS Chassis system at the 2020 SHOT Show, and I knew that sooner or later, I would be running around the forests and high deserts of New Mexico with one in pursuit of game. Fast forward to the Fall of 2020, and I found myself prepping for a mule deer hunt in the Lincoln National Forest. I would be building a deer rifle around the XRS chassis and using it for most of my hunting. In my opinion, the XRS Chassis is the Best hunting chassis currently available. 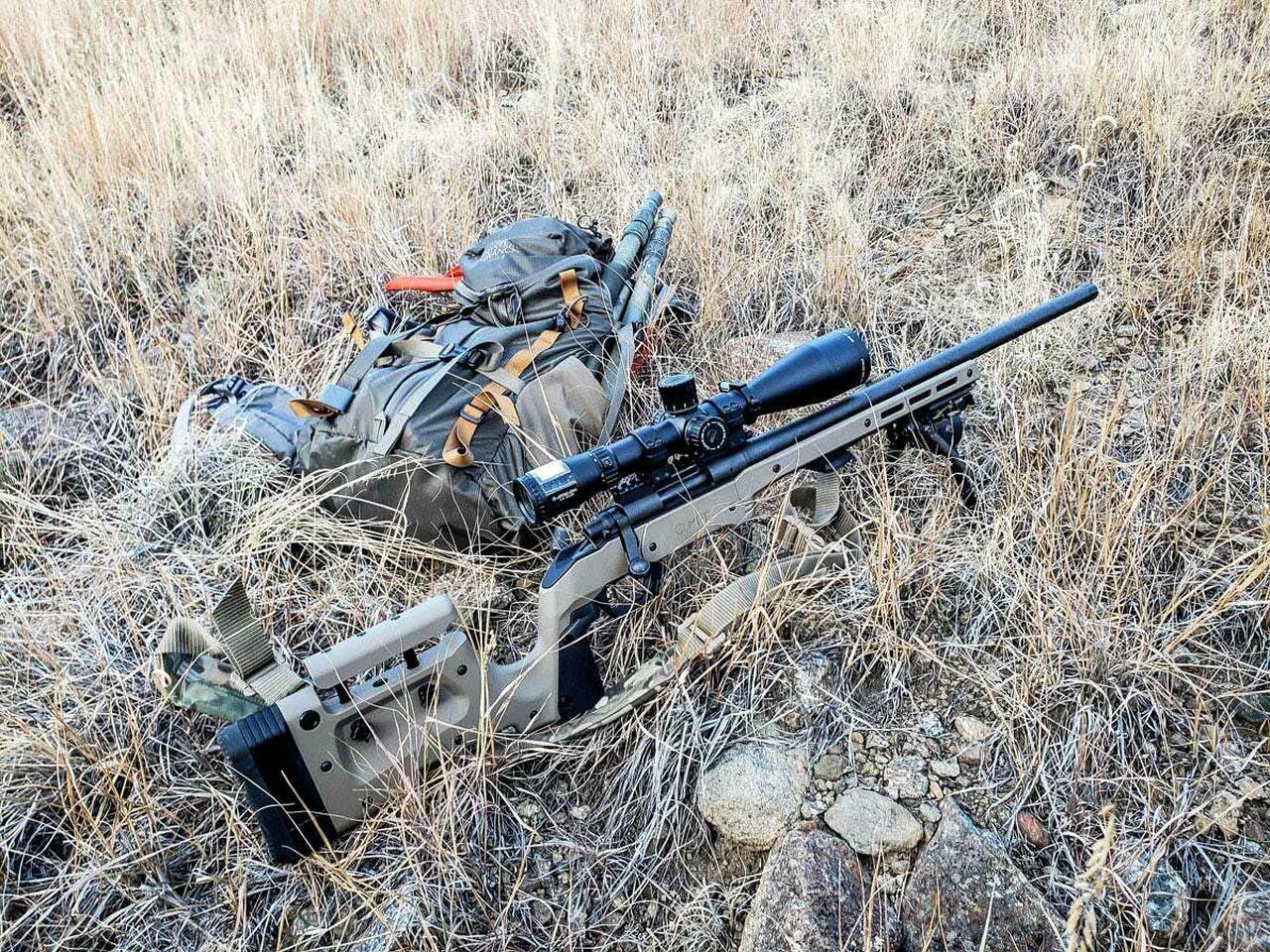 For the build, I used a Remington 700 SPS Tactical AAC-SD barreled action chambered in 6.5 Creedmoor. I left the trigger stock. Although the barrel is threaded, I did not add a muzzle brake, both because recoil in this system is mild and because I did not want to contend with added noise. After mating the Remington 700 to the XRS chassis, I added a Harris bipod and a BCMGUNFIGHTER™ MCMR-SM Quick Detachable Sling Mount to accommodate a rifle sling. Taking advantage of M-LOK slots on the bottom of the handguard, I attached the 3.3-inch MDT M-LOK ARCA rail section. This accessory allows me to quickly attach to a tripod if I need to get stable on rough terrain. For magazines, I chose the AICS short action 5-round MDT Metal Magazine. These magazines are tough-as-nails and insanely reliable. For ammunition, I chose Hornady 143 ELD-X.

For an optic, I chose a 4.5-30x56 Athlon ARES ETR with a gridded MIL reticle. The Athlon ARES ETR is a large scope, so I was concerned that I might be taking "too much scope" into the woods, considering its weight and magnification range. Once in the field, I was grateful for the extra magnification. For rings, I chose the MDT Premier Scope Rings. I have had these on my class rifles since they came out, and after a half-dozen classes and thousands of rounds, I have never had a problem with these rings.

Due to my crazy work schedule, I assembled the rifle the day before my hunt, packed my gear, worked a full day, picked up my best friend Mark, and headed South. You can read about his hunt here. We stopped at the family ranch to zero the rifle. By the time we got there, it was dark. We set up a cardboard target, and with the help of a Surefire flashlight and my Toyota 4Runners headlights, got to work.

After bore sighting, I fired three rounds at the center of the target. The 30-power magnification negated the need for a spotting scope. Through the scope, I saw a nice tight group several inches from the target's bullseye. I made some adjustments, fired another three rounds, and was zeroed. My last 3-round group was under 1/2 inch. I measured velocity via a Magneto speed chronograph and updated my Kestrel 5700. We set up a 10-inch steel gong, illuminated it with my Surefire (safely protected from bullets and fragmentation by a large rock), then set up on the 600-yard line to confirm data. I proned out and consulted my Kestrel. My hold for 600 yards was 3.9 MILS. Holding 4 MILS in the reticle, I fired a single shot and observed a center hit on the steel gong. Done. We packed up our gear and drove to Capitan, New Mexico, to rest and prep for the hunt.

We arose at 4 AM, made some coffee, packed our gear, and headed out. We drove to a canyon that my family has been hunting for several hundred years, parked, exited the vehicle without making noise, and crossed a barbed wire fence into the National Forest. We waited until legal shooting hours, then slowly started working along the rim of a canyon that ran North and South. We stayed on the East side of the canyon because the rising sun would illuminate the West side, making it hard for animals to see us as we picked our way along the shadowy East side of the canyon wall.

I had water, water filter, knives, game bags, snacks, extra clothing, fire kit, med kit, tourniquet, and a lightweight carbon fiber tripod in my pack. Around my neck, I had a range finder on a lanyard and some binoculars. My rifle was slung on my body, across my chest with the muzzle pointed down.

We slowly worked North. Mark and I decided to split up. He would head to the bottom of the canyon and slowly walk up in hopes that he would flush a deer out. I would stay on the high side of the canyon, and we would generally move North until we hunted the entirety of the canyon, then jump over to an adjacent canyon and repeat the process. We would stay in contact with each other and communicate via hand signals.

As soon as Mark got to the bottom of the canyon, we started our hunt. Not more than 10 minutes had gone by when Mark waved at me. I brought up my binoculars to see his hand signals, and he mimed deer horns and pointed over his shoulder. I saw a light brown four-legged mass steadily moving along the opposite canyon wall. My heart quickened as I brought up my binoculars. A mule deer! I looked around for a place to prone out, but I was on a rocky ledge. Without moving aggressively, I sat down and set up the carbon fiber tripod. Using the ARCA rail on the bottom of the handguard, I clipped in and found the animal through my binoculars. In New Mexico, mule deer must have a minimum antler size to harvest them. I could not see the antlers clearly through my binoculars, so I found the animal in my rifle scope and dialed to maximum magnification. The incoming light made it hard to see the antlers, but when the deer stopped and turned its head, I could determine that the buck was legal to shoot.

I consulted my range finder, which read 126 yards. To my naked eye, the animal looked further away. Trusting my range finder, I re-acquired the deer in my scope, chambered a round, and went through my firing sequence. Inhale, exhale, set parallax, flick off safety, inhale, exhale, check the level, shoot. By this time, the deer was slowly walking up the canyon and did not present a lung/heart/broadside shot. Since I was rock-steady, had a rifle capable of extreme accuracy, was relatively close, and had reliable ballistic data, I aimed at the back of the animal's head and gently squeezed the trigger. I watched the animal crumple in my rifle scope as I chambered another round and waited. Success.

Mark and I shook hands and walked over to the carcass. We reverently approached the animal, said our prayers, and enjoyed a few minutes of silence.

We secured the rifle, field dressed the animal, did a quick gear check, and whisked it off the mountain. Once we got it in the 4Runner, we packed the internal cavity with bags of ice and drove it to Alamogordo to a professional butcher. We spent the rest of the weekend fly-fishing for trout in the mountains and recounting the hunt.

For the last 14 years, I have spent hundreds of hours behind precision rifles testing, hunting, training, and, for the last several years, as a precision rifle instructor. I have become accustomed to adjustable combs, butt pads, length-of-pull, custom grips, M-LOK attachment points, and ARCA rails for ancillary gear. Over the years, my hunting rifles have essentially become lighter versions of my precision rigs. I have had many successful hunts with chassis rifles, but I still enjoy hunting with a more traditional form factor. It just seems to "flow" better in the wild. The MDT XRS chassis gave me all of the critical chassis features in a traditional form factor. The stock is comfortable to get behind. The grip is ergonomic, and there are no sharp points on the chassis that get hung up on gear or inhibit movement.

The rifle system I took into the woods weighed 14.2 lbs., which is a tad on the heavy side for a backcountry hunt in the West. This would not be a problem if we were using mobility platforms like horses or ATVs, but since we were not camping or hiking more than 8 miles from our vehicle, I didn't mind the weight. If I needed to cut weight, I would opt for a smaller scope, medium taper barrel, or a carbon wrapped barrel. If I needed a lightweight rifle, I would probably look at the MDT LSS-XL Gen2 platform.

Having a tripod, and a quick-attachment method led to a successful hunt.

In conjunction with the tripod, the ARCA rail section contributed significantly to the success of the hunt. Because of the steep rocky terrain, proning out or even kneeling was not an option. I found sitting down, with the rifle clipped into the tripod, just as stable as a prone position. I would feel confident harvesting deer-sized game out to 600 yards if necessary.

Pro tip: Practice shooting alternative positions. Set up a timer and see how quickly you can get into position and ready for a shot. This will pay off in competition, on the battlefield, or during a hunt.

My Remington 700 with the MDT XRS Chassis will be my primary hunting and ranch rifle for the foreseeable future. It will also be my primary training rifle for teaching precision hunting classes.

Thomas Gomez is the founder and C.E.O. of High Desert Rifle Works. He has over ten years in the Healthcare, Tech, and Outdoor Industries, working as an analyst, researcher, consultant, writer, and program manager. Thomas has an M.B.A. from Western New Mexico University, numerous armorer certifications, and teaches precision rifle for Q Pro Defense. He spends his free time ranching, farming, fly-fishing, and hunting the high deserts and mountains of his native New Mexico. He can be reached via Instagram @highdesertthomas.