At 4am standing in my kitchen, the aroma of dark roast coffee hit my nostrils as a text rang out from my phone "I'm here". My friend Logan loading his gear into the back of my already loaded truck, said "you ready?" To which I replied "ready as I can be" with an ear-to-ear smile.

We then set off on our journey from Vancouver Island to the sprawling endless moose country in the Central Interior of BC to meet up with the rest of our group, driving through some of the most breathtaking scenery Western Canada has to offer. We arrived later in the evening at dark to a partially snow covered camp. The snow had come unexpectedly and was welcomed as it makes tracking much easier. There were actually recent tracks of what appeared to be a cow and calf going right through our site. Looked like things were off to a good start.

After setting up and settling in, we all gathered around the fire for a few drinks and got acquainted with the group. We shared tales of past hunts and fishing trips, we talked strategy and studied maps of the area. We weren't leaving without our two bull moose that we had for our group limit. 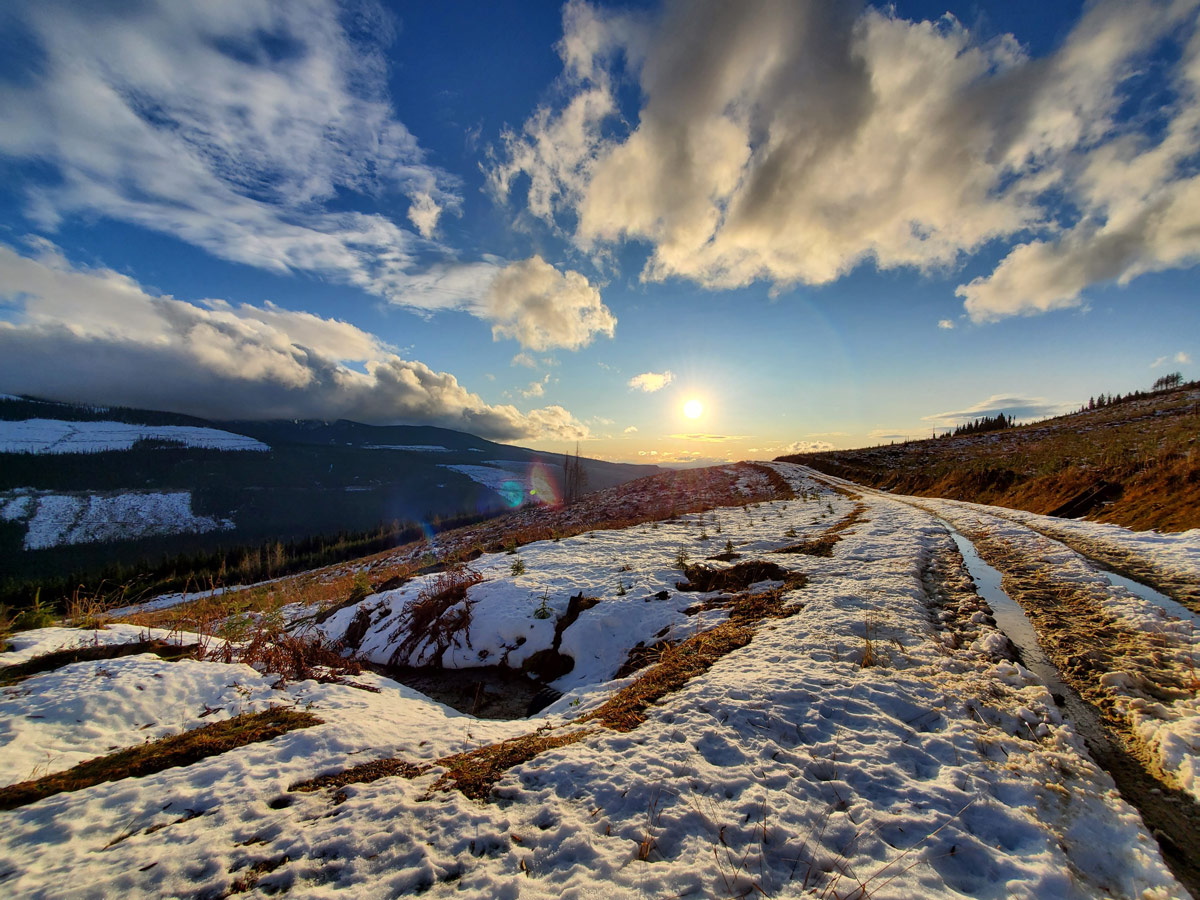 The first morning came and within 20 mins of driving we saw a cow moose standing at the roadside, heading towards an ideal marsh. Sadly no bull though. Onward we went. We patrolled endless active and deactivated logging roads and glassed endless mountains and valleys, periodically checking in via radio with our other half of the group. We had both seen cows but those bulls were being elusive. As the days went by, we saw encouraging signs, got stuck in the snow many times, covered a large area, had some fun hunting grouse, but were not finding the bulls. Then we got word from one of the group members that his buddy Stu and his friends were hunting the next valley over and we should go visit that night.

Good thing we did, as they had already bagged a big bull and was hanging for all to see at their camp. He said to us: "There's a chance you might get one bull where you are but there's a really good chance you'll get two here. I've never seen so much sign in an area before", he said with some excitement.

That night we made the call to do a morning hunt and then pick up camp and head to Stu's camp as they were done and heading home that day. They gave us a lay of the land and told us where they had seen bulls and cows as well as the most sign. We were optimistic.

We were now six days in and getting antsy. With the new camp established and new terrain to explore we set off, certain we would get at least one bull. Two more days passed and still no visual of any moose. It was starting to get really cold now, with windchill hitting -15C. That night more snowfall came, making moving around a lot harder. We had chains on our trucks now, as some of the hills became impassable without them. We were at the end of the day, around 4pm when we were making the call to head back to camp. Another disappointing day when we got out of the truck to drain the main vein, Logan said "well Dave, can't always win...but it's been a good trip. Nice to get out here away from it all" I agreed. Even without bringing meat home, its nice to just get back to basics and have a guys trip enjoying the beautiful wilderness we have in our back yard.

We got back in the truck and not even 2 minutes down the road we came around a corner we had drove around at least ten times in the last few days and there standing in the middle was a big bull! I had a mouth full of Doritos when Logan yells "MOOSE!" followed by "BULL!" less than a second later, as he looked through his binoculars. I scrambled out of the truck and grabbed my rifle from the back and frantically loaded 3 rounds of my personally rolled 165gr 308. At this point the bull was on the move and headed across the road and over the edge of the bank, making a run for it. I let out probably one of the worst cow calls I've ever done. Logan also had a duck call around his neck and let out a blast on it, as we heard it works pretty well. The moose slowed down to a stop and swung its head around with a puzzled look trying to figure out what we were. It was enough time for me to drop to a knee and get a head/neck shot as he was quartered away from me and a back end shot wasn't practical or ethical. BOOM! the deafening shot rang out and happened so fast I don't even remember seeing through the scope. My heart was beating out of my chest at this point. To my amazement, the bull dropped right on the spot! In disbelief I started to take a few steps forward and he was down for maybe a few seconds before starting to move again. I quickly chambered a new round and stood in place now, roughly 70 yards away standing, I fired the next shot and this time I had a broadside shot of the boiler room. BOOM! the second shot hits square, double-lunging the bull. This time I knew I had him as he wasn't moving and there was a red cloud of mist coming out the exit wound. He dropped down on the spot once more this time on his side and started to breathe slower. Approaching closer I saw he was done. At this point my adrenaline was pumping like never before. I can't explain how stoked I was, it was surreal euphoria, like everything was coming together in that moment. All the times I got skunked on a deer hunt, all the time at the range, the reloading bench, reading hunting books, watching videos, research; all came to an apex within those 2 minutes. After Logan radioed the rest of the group "Bull down, on the 'P' road!" We approached the massive animal and after saying our peace and giving the bull respect for filling our bellies and families' freezers, I got a couple pictures with the kill and we began the field dress process. "Ready to get bloody like you've never been before?" Logan says to me, as I whipped out my knife. We began the process. 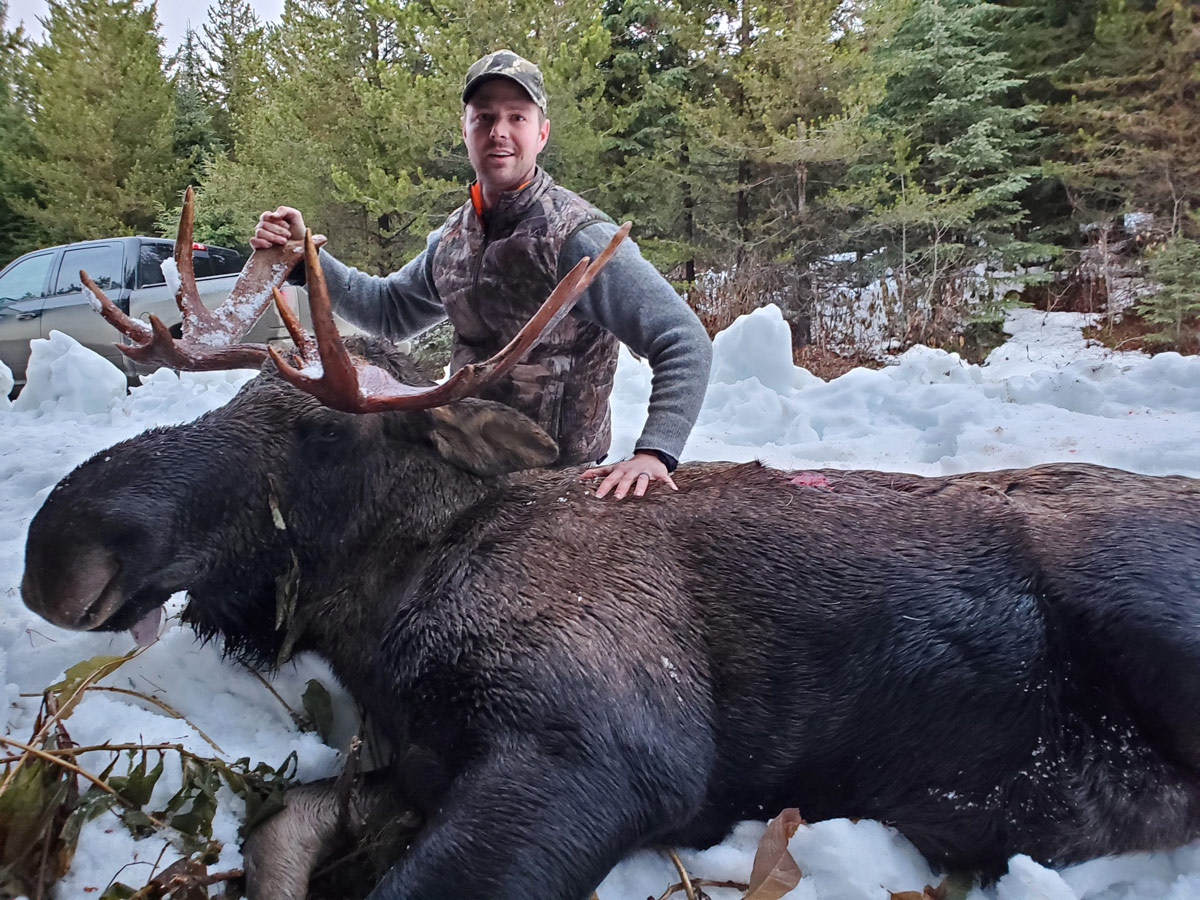 It was dark now as the rest of the group arrived and after some high fives and congratulations we got it into Steve's F350 and returned to camp. We hoisted up the cleaned out carcass and began to skin. It was still very cold, perfect hanging temperature for the meat to set up. That night we celebrated with beer and bourbon, retelling the story of the hunt, each person telling it more far fetched and rediculous than the last. We ate fresh grouse we had picked up along the way throughout the day. It was a good bonding experience. Having one of two moose in the bag and needing to get back home. We loaded up my truck with the kill and I left early the next morning to get back to the island and get it to the butcher for processing. 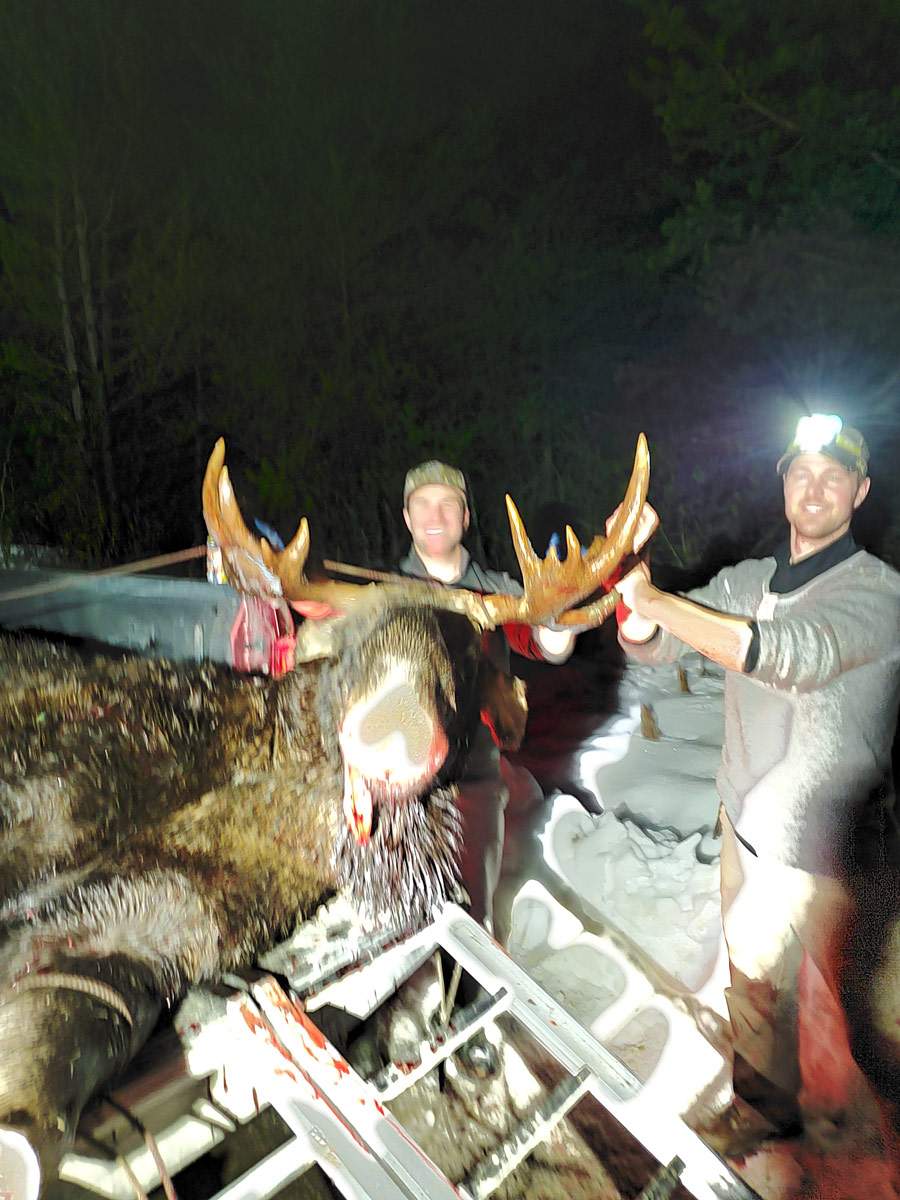 The rest of the group stayed and got a second bull two days later, which was even bigger than the first, as we found out after the processing had been done and both had been weighed. Both bulls were nearly 700lbs dressed out! It's amazing seeing one up close and realizing just how massive these animals are. I definitely have a deeper respect and understanding for them and how tough they are living in the conditions they do. I'll remember this trip forever, made me improve in so many ways. As the saying goes: "when faced with adversity you never rise to the occasion, but fall to your highest level of training". You're never done training. 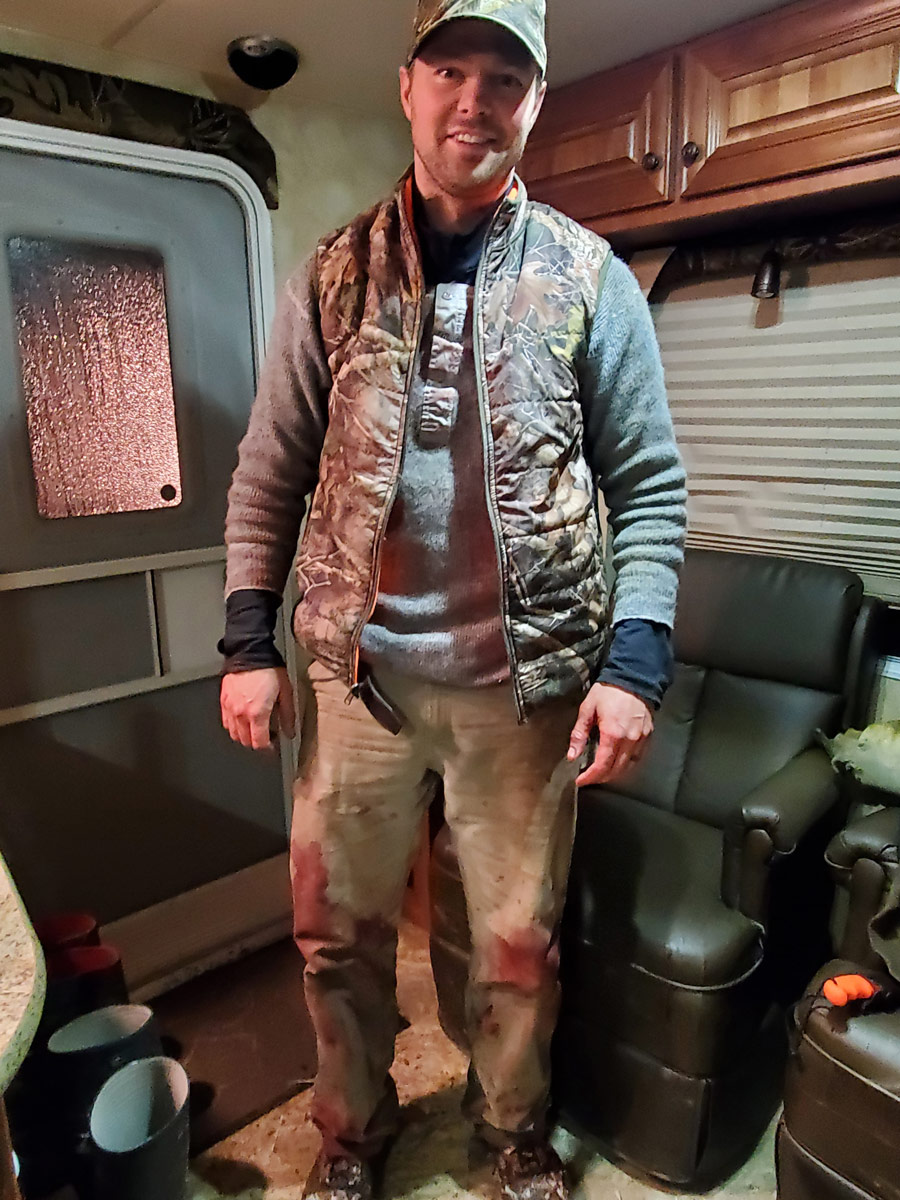 David is the 2nd place winner of our #MDTSTORY contest.