My story is from South Africa and starts some years back in 2015. Autumn in Cape Town, where I live, is painted with golden bronze and orange rust-coloured vineyards in late May, preceded by the vibrant greens of the scorching Summer now past. With the steady drop in daily temperatures marking the coming of the winter hunting season, my family – lead by the eager hunters amongst us – started planning a trip that all of us would attend. I am blessed with a large family, which means that organizing a trip like this would require a bit of planning. In the weeks to follow, multiple suggestions for activities and locations had been made, but the decision was made when a family friend invited all twenty-four of us to his farm in the greater grasslands area of South Africa for a rugged camping experience.

As July rolled around and brought the first mountain snow with it, my younger brother and I, as well as a cousin packed the car and left on the 8-hour journey to the farm just outside the small town of Hanover, where the rest of my family were already waiting. With every passing hour, the change in landscape was noticeable as the blue mountains of the south started easing and flattening into the golden white grasslands of the greater Karoo area. The air also became noticeably dryer and colder with every pitstop we made. When we arrived, we were amazed at the beauty and the expanse, with our camping site resembling an ancient volcano crater offering a breath-taking view of the surrounding country for endless miles. The next week was filled with campfire stories, cold nights under the stars, laughter, and camp meals – largely consisting of Spring Buck venison secured by my uncles Koos and Isaac on their daily hunts. Not having my own rifle at the time, I walked with my uncles every day and simply enjoyed being out there amongst nature and the animals. On the last night of our time on the farm, our family friend and owner of the farm told us of a herd of migratory Fallow Deer that occasionally passes through one of the secluded parts of the property. This part of the farm consists largely of an old and eroded river that follows a ragged, rocky ridge with two large trees providing the only shade for miles. I was immediately intrigued by these unfamiliar animals, which I later found out is a non-indigenous grazer that arrived from Europe during the early colonization period, reportedly along with rainbow trout that now populate our rivers. The best part was that the meat of these deer is supposedly the tastiest, and being a foodie myself, I had to find out. Unfortunately, with the trip at an end and me having to return to my textbooks at varsity, I would have to wait. 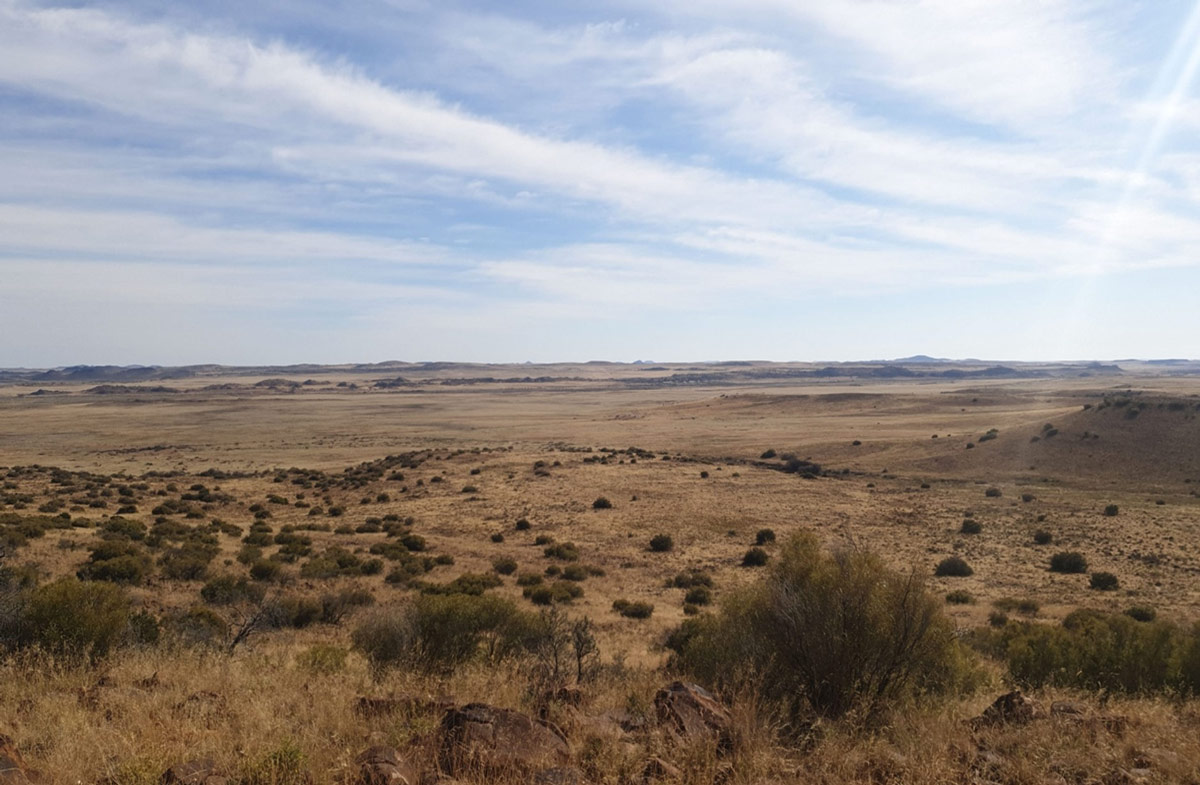 In the years following, I often fantasized about walking the dry riverbed and coming across a massive stag with large flat antler palms and long brow tines, which at that time I only knew from online image searches. Three years passed and I never had an opportunity to go back to the property. One day my uncle called and said he wanted to go hunt for one of those seemingly mysterious deer. I was so eager I almost invited myself. With the date set and the trip planned, I was like a child on Christmas eve. The 8-hour trip, although as beautiful as before, felt like it took significantly longer this time. When we arrived, it was apparent that the poor rainfall of the previous two years had taken its toll on the grasslands and plants that these animals rely on. We hunted for three days and never saw a stag. I would have to wait another year.

As the next year rolled around, and I finally finished my engineering degree, I decided that I would embark on the lengthy journey to legally obtain a firearm in South Africa. After reading a lot about different cartridges, calibres, and rifles, I finally decided on a 6.5 mm Creedmoor in the Remington 700 action. One year later in 2020, whilst South Africa was in total lockdown, my license was finally approved. By that time, I had spent countless hours online researching rifle chassis and reading reviews and was mostly impressed by the MDT XRS. As impressed as I was at the technical prowess of the chassis, I really loved the way it looked. And after buying it, I was very pleased to learn that the buttstock and vertical grip fit me perfectly. With a rifle in hand, I was ready to leap at my first opportunity. 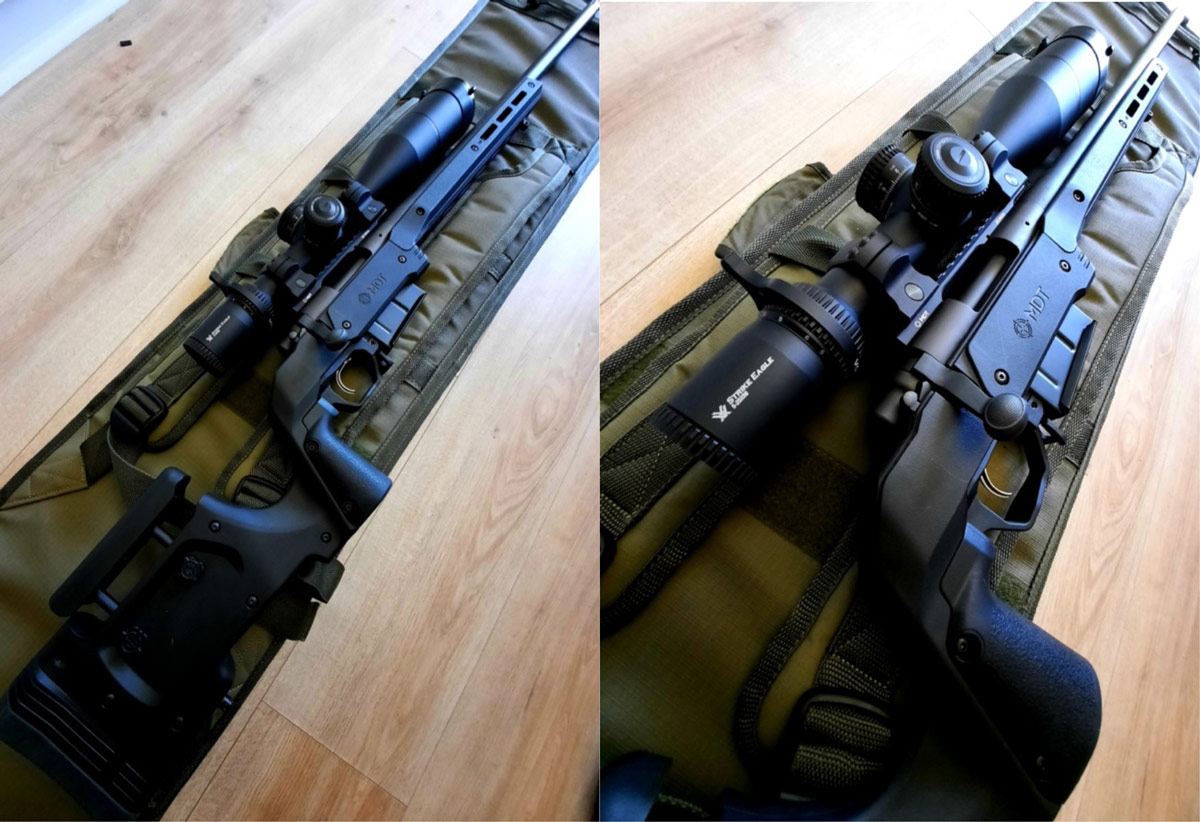 Months later as the hunting season had begun and the lockdown started easing, my phone rang again, and I would have the opportunity to hopefully get a beautiful stag. This time, we chartered a plane to take us to the farm, thereby giving us more time to hunt. After a cramp and turbulent flight, the little Cessna touched down on a dusty landing strip partly overgrown with grass. As soon as we landed it was apparent that there had been significant rainfall and that the vegetation had greatly recovered. This was a good sign. 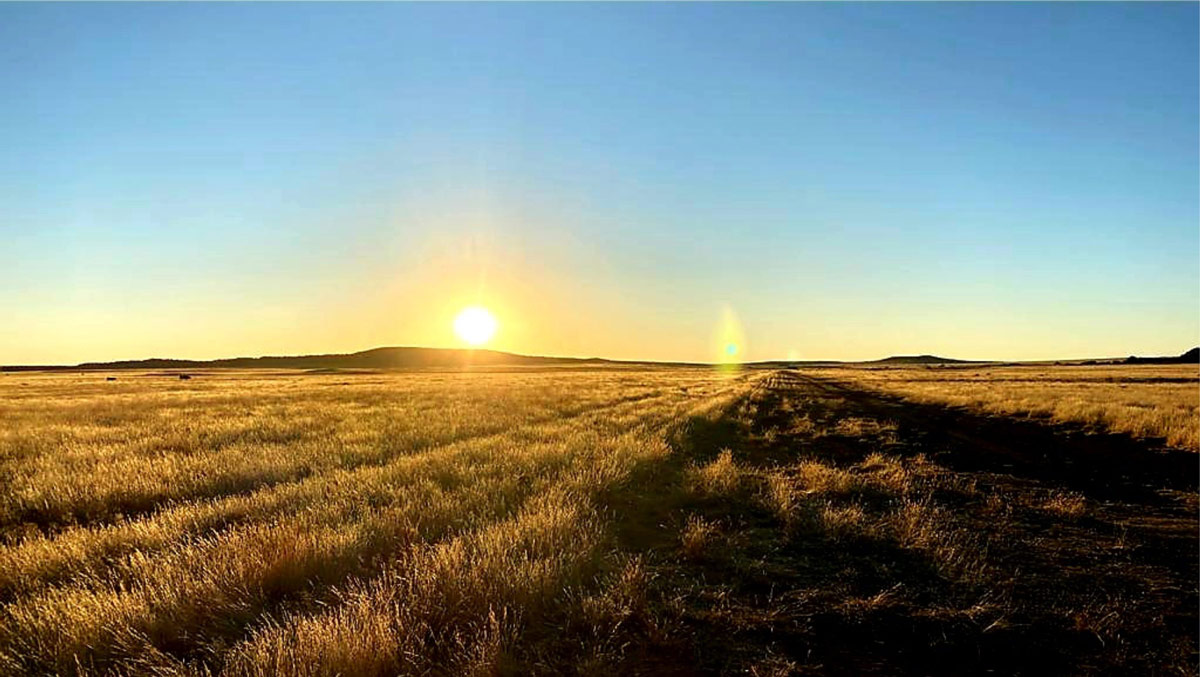 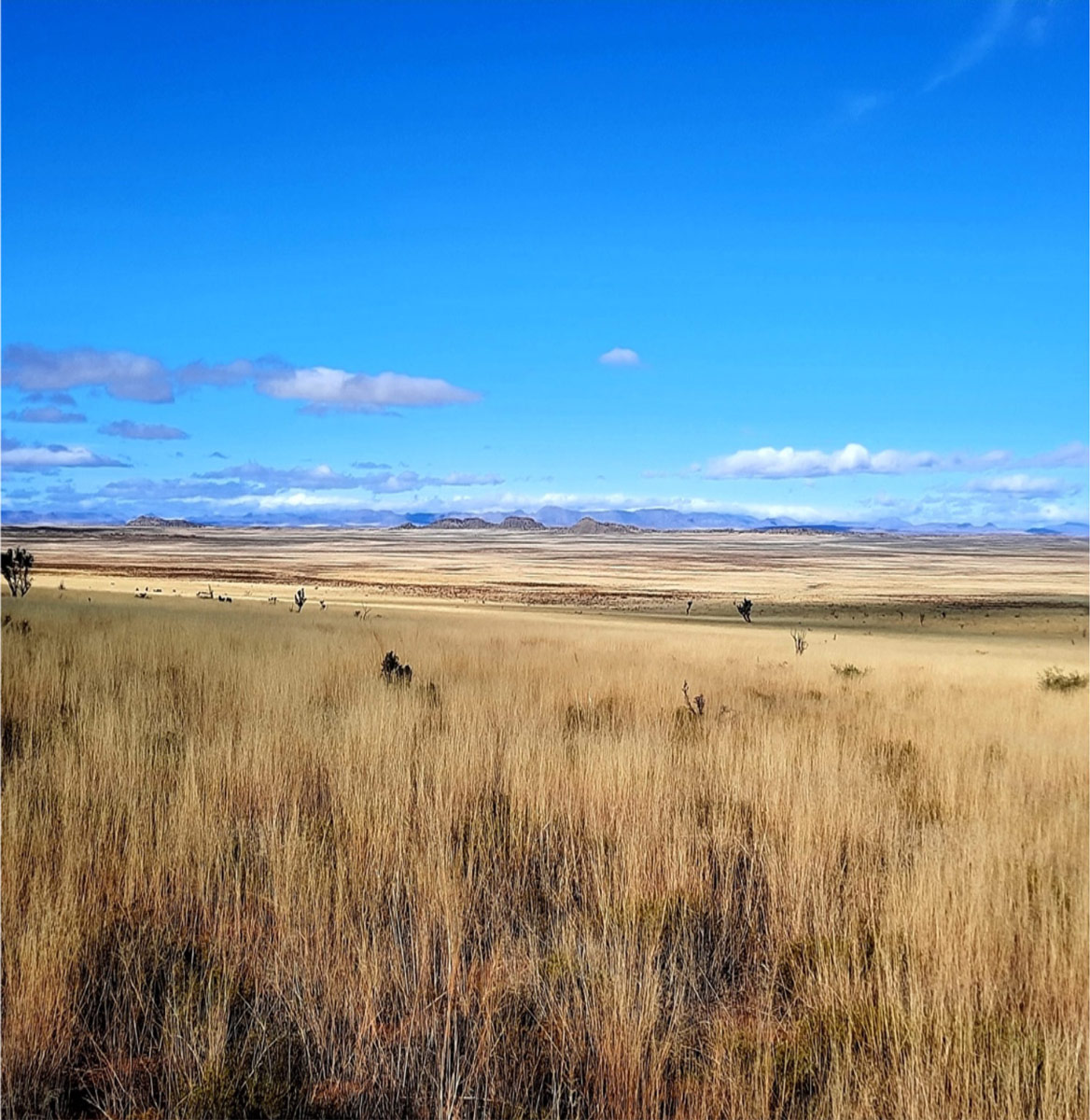 For the next few days, I woke up at 5 AM, made coffee in my thermos, then grabbed my rifle and walked to the part of the property where the Fallow Deer were reported to be. The idea was that I would already be in an ambush position on the ridge at first light, thereby maximizing my odds. I then proceeded to scan every inch of the surrounding flats and riverbed through an old pair of binoculars whilst waiting for the vital rays from morning sun to relieve me from the frigid cold. Luckily, I found further relief in the warm thermos of coffee I carried with me. Around midday I would head home for lunch and discuss the happenings of the day with everyone in our group, listening to their encounters and elaborating on my lack of sightings. On our last day of hunting, the walk back to the house was particularly difficult. Although very fortunate to have seen a few fawns, I had still not been able to find the stag of my dreams, the one I had been fantasizing about for five years. After enjoying delicious venison burgers for lunch, I asked the owner whether I could venture out just one last time, perhaps I might get lucky. 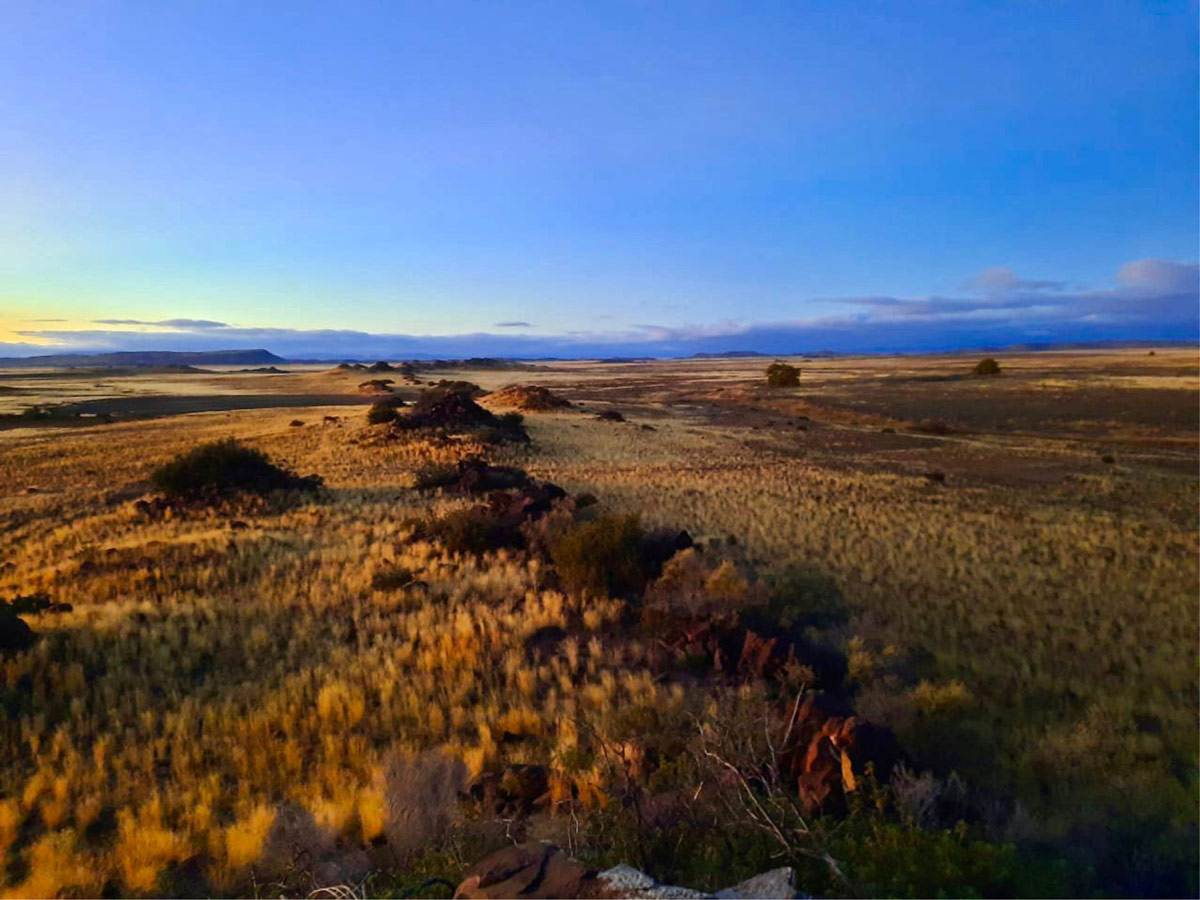 A few hours later I was nearing the rocky ridge where I spent my past mornings glassing from. Further to the south I identified the highest part of the ridge – a lone hill closely bordering the deepest section of the river. I analyzed the wind direction and determined my angle of approach. I slowly made my way towards the hill and ascended it, being very careful not to tumble any loose rocks. When I reached the top, I snuck behind a bush so as not to silhouette myself in the late afternoon sun. What I saw next, I did not need a set of binoculars for. Far off across the broken riverbed, about 800 m, I saw a large set of antlers, almost fluorescent white as they caught the afternoon sun. My heart immediately started racing. As I looked through the binoculars, I remember thinking that this stag was even larger than anything I had seen online before. He was surrounded by ten fawns, all slowly grazing in my direction. I carefully positioned myself and rested my rifle bipod on a rock in front of me, but I knew he was too far away to even attempt an ethical shot. As I watched him through the binoculars, I noticed his dark hide, broad shoulders, broomed antlers and how he was herding the fawns. This was clearly a mature animal who had seen a lot of fights.

I watched him for almost an hour, and I was getting more anxious by the minute as the sun creeped towards the horizon. I was running out of daylight. I thought about attempting to stalk them across the grassland, but cover was scarce and the wind by that time had started to swirl in different directions. To this day, I can’t believe what happened next. With about 10 mins of shooting light left, he started herding the fawns in my direction. Calmly and slow at first, then faster. They soon took to a slow jog and I knew I might get a chance. I re-organized my shooting position to face the river, specifically a section where I had previously noticed broken reeds and branches in the river, hoping that that was their route through the river. I secured my bipod on a large rock and made sure I was in a comfortable shooting position. My heart started pounding in anticipation. I looked through my rifle scope and adjusted the zoom to ensure that I have a sufficient field of view. With the rifle pressed into my shoulder, I quickly put a round in the chamber and closed the bolt.

Now he was in front, leading the herd to where I had my muzzle pointed. As they reached the riverbank, which was largely eroded and quickly dipped down into the reed and grass covered river, he came to a halt and allowed all the fawns to pass. They bolted into the dense reeds, mostly vanishing from sight. With minutes of light left, the stag turned 180 degrees towards where they had come from and stared into the distance, perhaps looking for what had scared and coaxed them into a jog. He was now broadside at what I guessed as 210 yards. The wind was on my left cheek, but with a 143gr bullet I knew I would not have to compensate much. I put my finger on the trigger and held just behind the shoulder – breathe in – breathe out – squeeze. The shot broke the silence as the rifle recoiled in my shoulder. Through the scope I could see the impact as I heard a solid thud soon after. I took my finger off the trigger as I gasped in joy and disbelief of what had just happened. My hands were shaking. With a red sun on the horizon, I made my way down the hill towards the river, eager to see him. As I passed through the river, I found him lying on the eroded riverbank exactly where I had shot him. Five years later, there he was, my stag on the river’s edge. 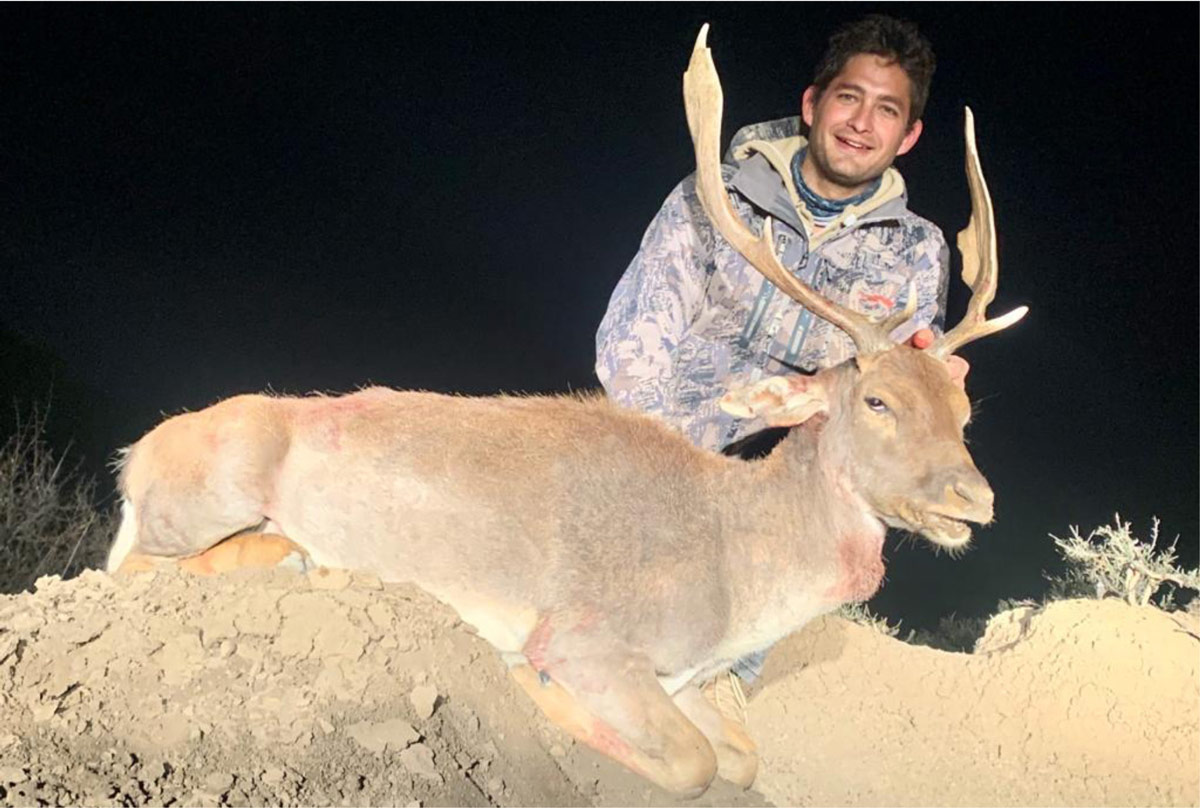 P.S. afterwards we gathered around the fire as I told my story, still in utter disbelief of my luck…and the meat was as good as I expected, if not better! 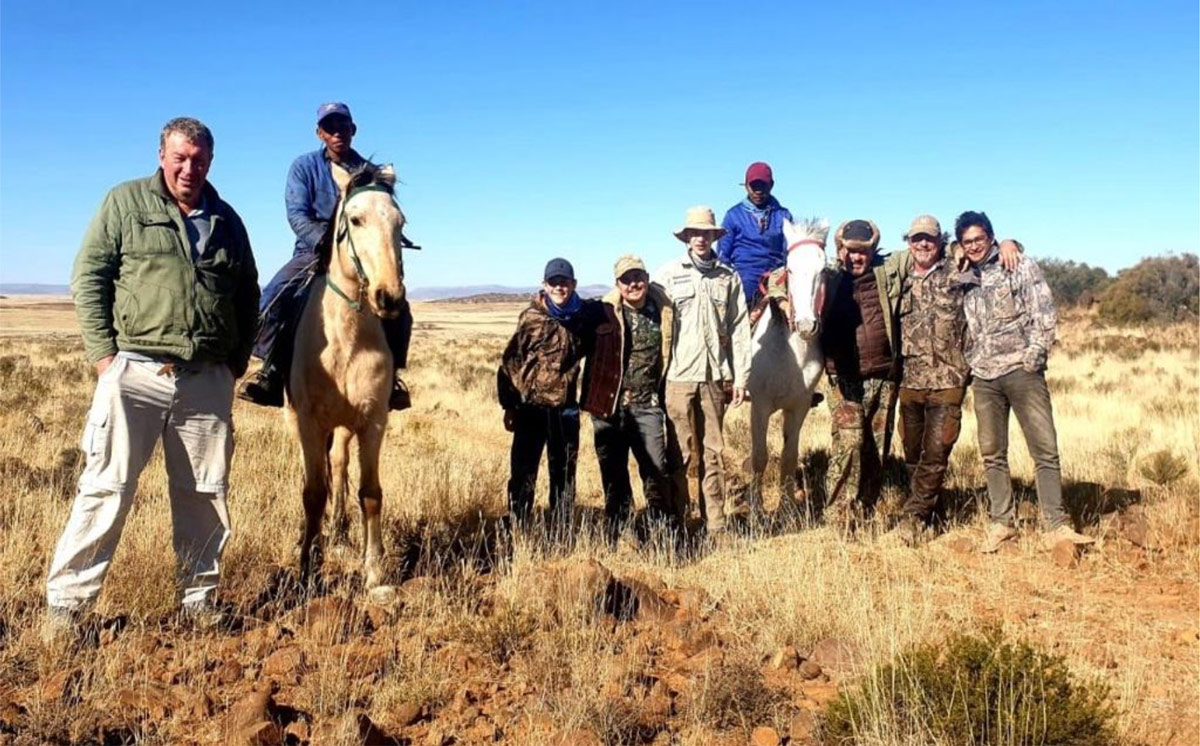 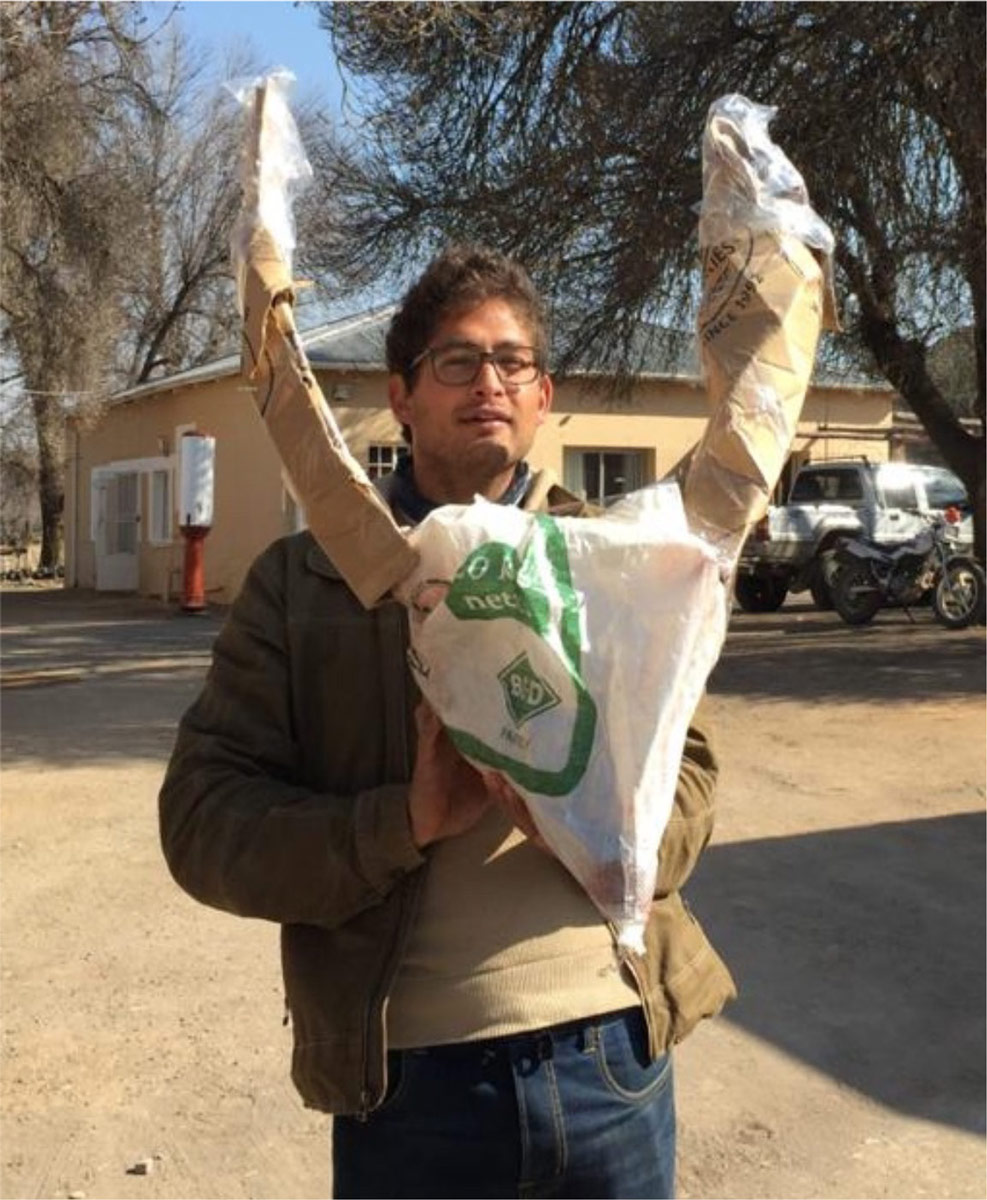 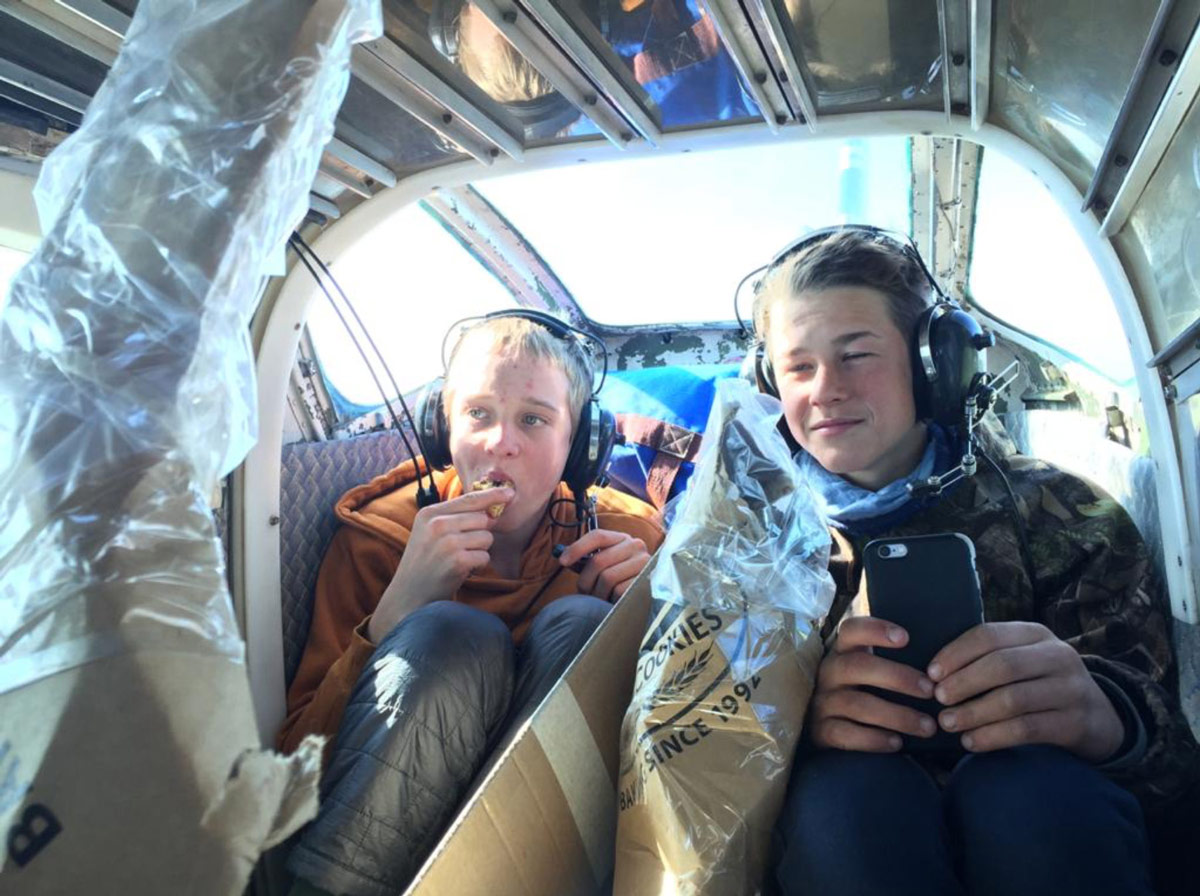 Liam is the 3rd place winner of our #MDTSTORY contest.