I recently listened to a podcast where the main focus was custom ammo manufacturing. It was brought to my attention that aside from .223 rem/5.56x45mm NATO, 6.5 Creedmoor is the most popular cartridge in the country. After pondering that statement for a few minutes, it made sense. It takes everything the venerable .308 win does and improves on it for the most part:

And to round it all off, it looks like the military will be switching over to it. In the big picture: more and more manufacturers will be ramping up cartridge production to try to win that lucrative government contract. What that means for the end-user: more ammo availability.

So why are we talking about this? Because, internally, I wanted to know why I currently don't have a 6.5 Creedmoor in my safe. I've had a few in the past; Ruger American Hunter, Mossberg MVP LC, and a DPMS Panther that was re-barreled with a Criterion 6.5 CR pipe. Aside from the AR10, I wasn't shooting them to any distance, so they got traded away. The gas gun was more of an experiment that spent some time in the back of the safe before it was ultimately sold. 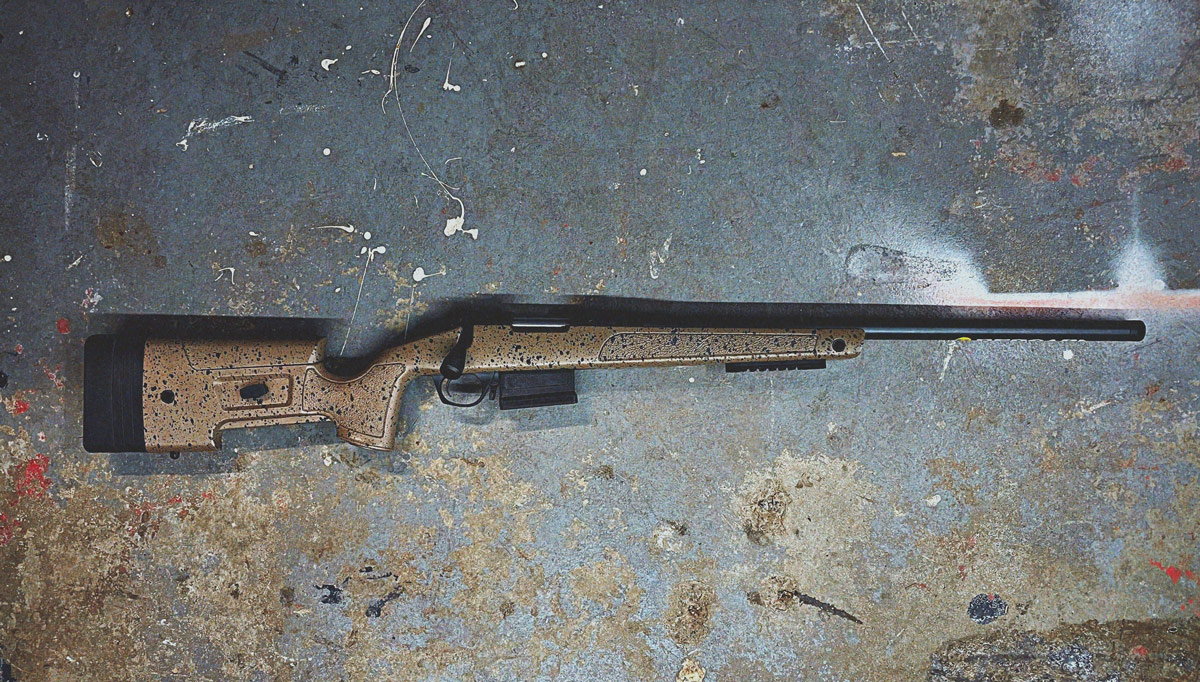 As I fall deeper and deeper into the abyss that is precision rifle shooting, I have used everything from .308 to different 6mm cartridges and the awesome 6.5x47mm Lapua. Except for.308, I have never fully committed myself to a high-performance commercially available viable precision round. Time to change that, but there's a catch. I decided I would buy a factory 6.5 Creedmoor and slowly improve it to something unrecognizable.

I went with a Bergara B14 HMR. I once had a B14 HMR in .300 Win Mag, and I loved everything about it… except the cartridge. Before making any modifications, I wanted to get some baseline data, so I threw on a Primary Arms PLx 6-30x Mil-Dot scope and a bipod and headed to the 100-yard range. 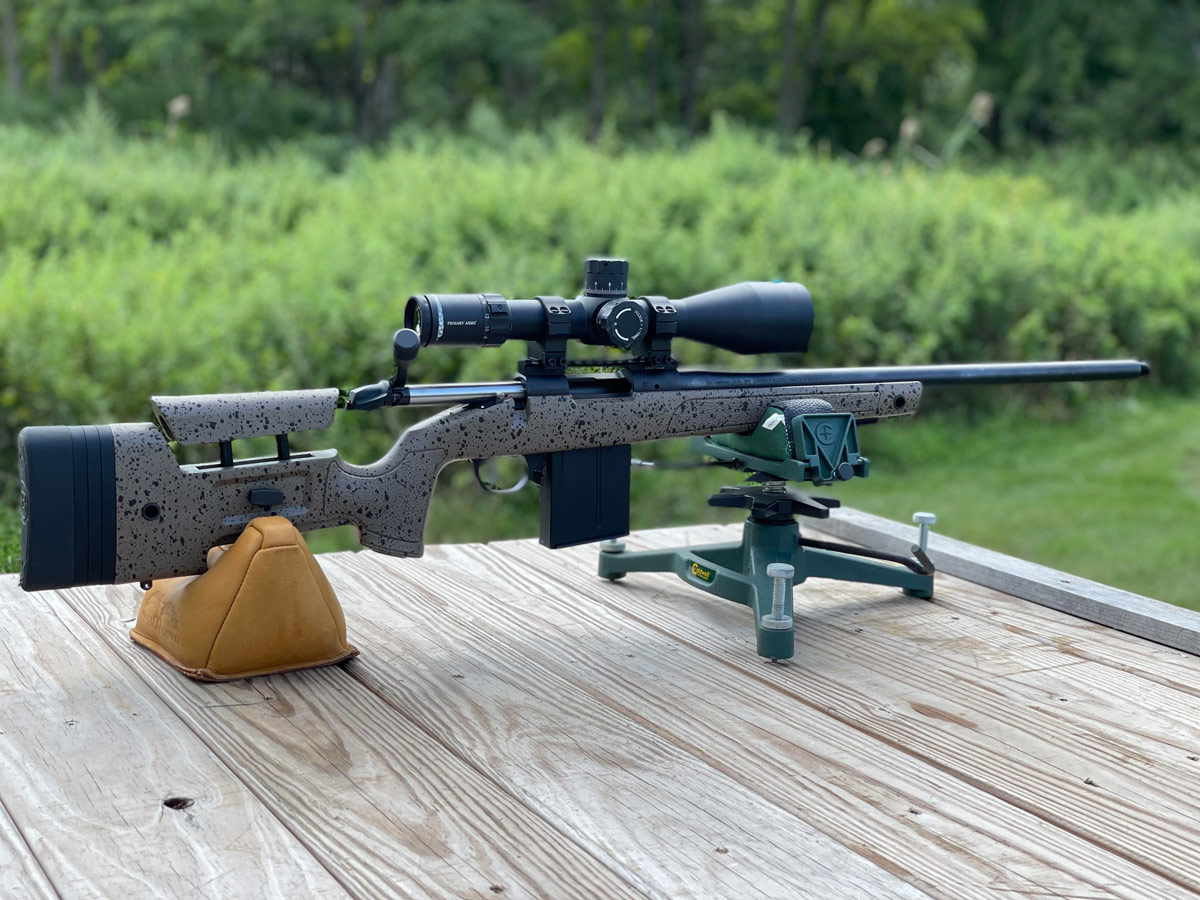 The ammo I was using was the leftover hand loads for the DPMS/AR10 project, mildly loaded 140 grain Hornady BTHP and 142 grain Sierra Matchkings on top of 41.5 grains of H4350. I wasn't concerned with the loads being dialed in because this was just a break-in period. However, the results were astounding. I did the typical "clean between rounds" for the first couple of shots while zeroing the optic. I then shot a couple 3 round groups while cleaning in between and then got to the last two 5 round groups: .872" and .680". I thought it was a fluke, so I loaded up 9 more rounds just to see what would happen… .559". No Fluke.

You might ask, "why would you bother changing anything at that point?" Well, the Bergara B14 is not the most comfortable gun to shoot, being that it has essentially an improved hunting stock. The stock is light, lacks grip adjustments, and the forend is slim. It also lacks the modularity that I have become accustomed to with chassis systems. If I needed a slick hunting rifle, the B14 in its current state would be fine, but I wanted a legit precision rifle. The rifle did have a threaded muzzle to which I would attach a brake. The trigger was mediocre. 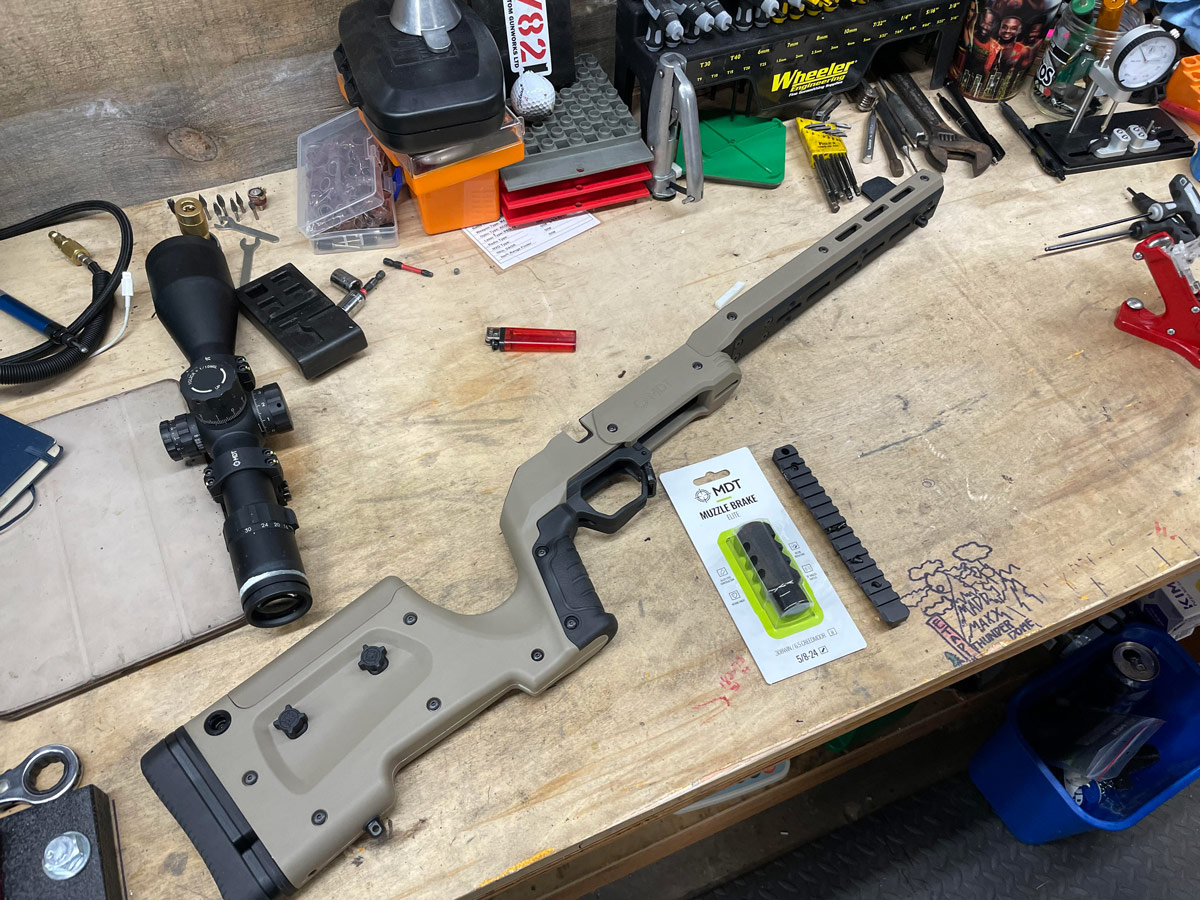 I pulled the barreled action and swapped the factory trigger for the Geissele Super 700 taken off the 6GT build. After changing the trigger, I dropped the barreled action into MDTs budget-friendly XRS Chassis System. I topped it (tipped it?) off with the MDT Elite Muzzle brake. We added the XRS enclosed forend ARCA rail for some added stability and modularity. 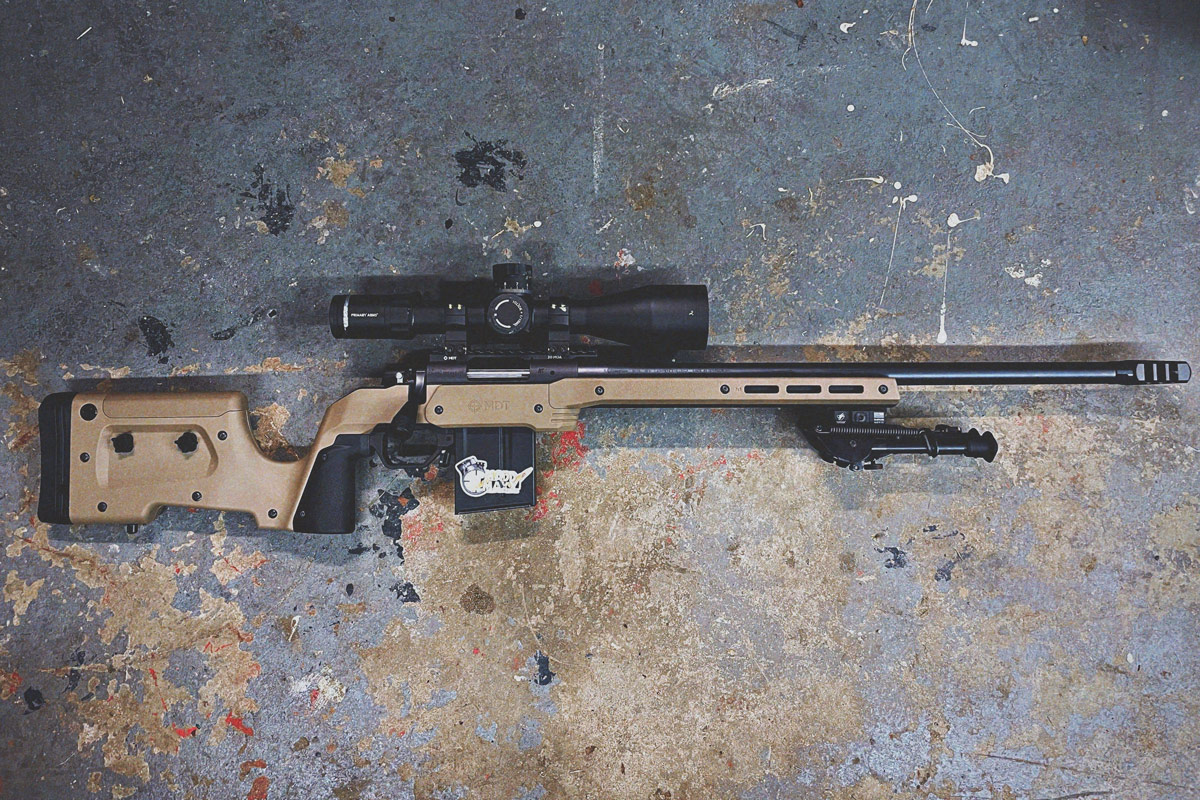 Note: before swapping all that out, there were several range trips to continue breaking in the rifle. As the throat wore in, the groups opened up across the board. At this point, groups hovered around 0.8" to 1.2" with factory ammo and the 140-grain BTHP hand loads. Also, in 5 round groups, having a single flyer became more common. 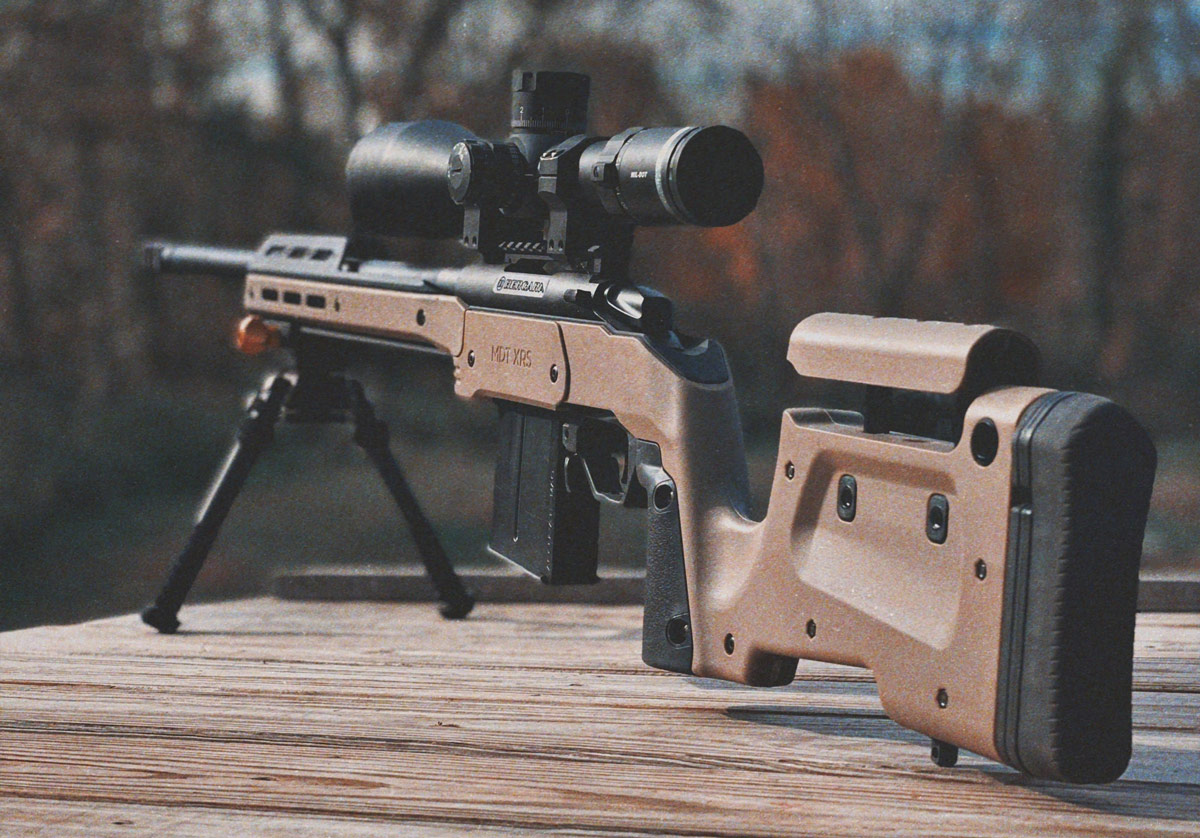 BACK TO THE RANGE

Since the factory B14 stock is considered a mini chassis, I wasn't necessarily expecting accuracy improvements with no human factor. I was expecting a more comfortable experience to make shooting more consistent. My observations: 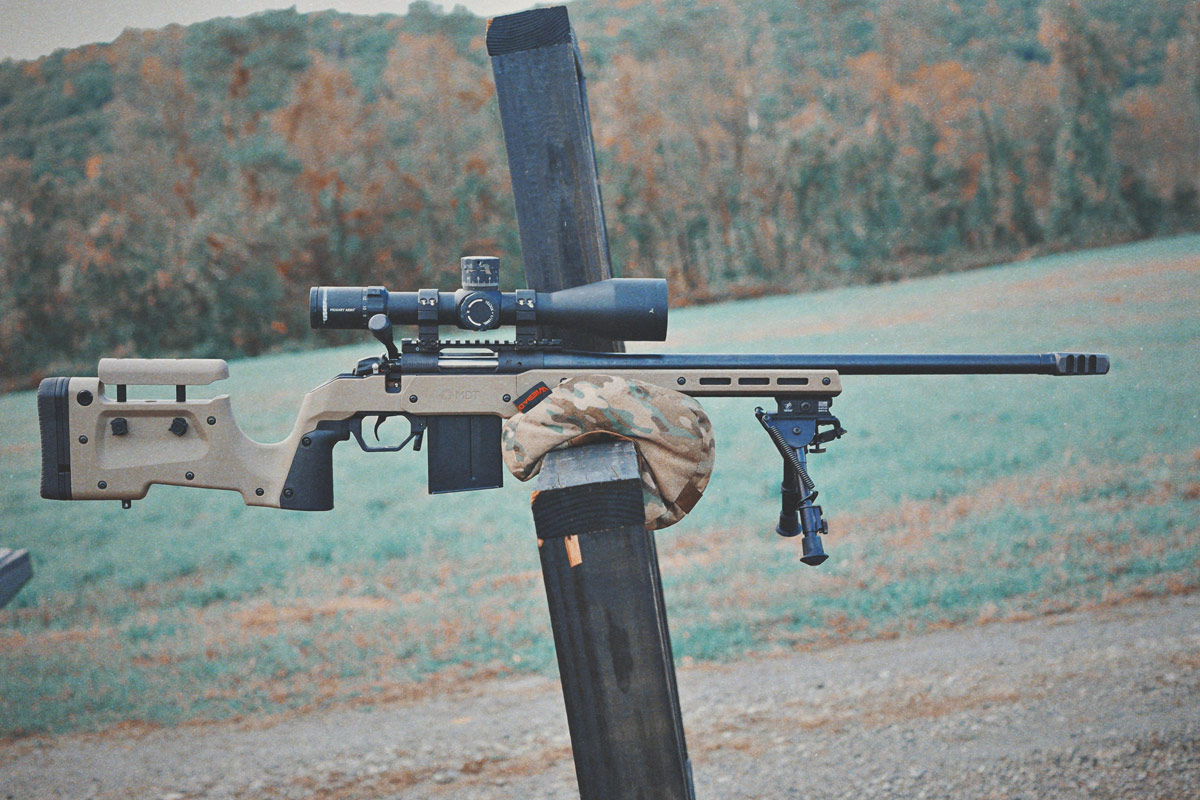 The goal is to take a factory rifle and make it on par with my other bolt guns. What do I do with those other rifles? Compete. So what's the next step? I'm not satisfied with the groups we're seeing, even with some preliminary load development. In the following story, I will spin up a new barrel and do a full load development. Depending on the weight of the rifle, we're going to balance it out and make a competition-ready rifle.