Optics are a critical part of modern rifle shooting. And since good optics aren't cheap, whenever we put down money for expensive glass, we want to end up with a product that meets our needs. Modern optical designers do a fabulous job of providing us with riflescopes, and while they can bend light like a Jedi Master, they can't bend the physical laws which govern it. Therefore, consumers need to understand those laws at least a little. A good start is being aware of the Optical Triangle and what it represents.

More: HOW TO TEST YOUR NEW RIFLESCOPE

You've likely never heard of the Optical Triangle - Magnification, Eye Relief, and Field of View. While it's not as interesting as the Bermuda Triangle, it's an essential concept for rifle shooters to grasp. Look at the diagram reproduced below; that's the optical triangle. It's a graphic representation of three factors an optical designer needs to juggle when developing a rifle scope, field of view, magnification, and eye relief.

Magnification is how much closer the scope makes an object look; for example, a 4X scope makes an object appear four times closer. Eye Relief is how far the shooter's eye needs to be positioned from the rear of the scope to obtain the full image the scope is capable of transmitting. And Field of View is a measurement of how large that complete image is at a given distance; it's often expressed in feet measured at 100 yards.

The Optical Triangle represents that changing the dimension of one side of the triangle will also influence the other two sides. 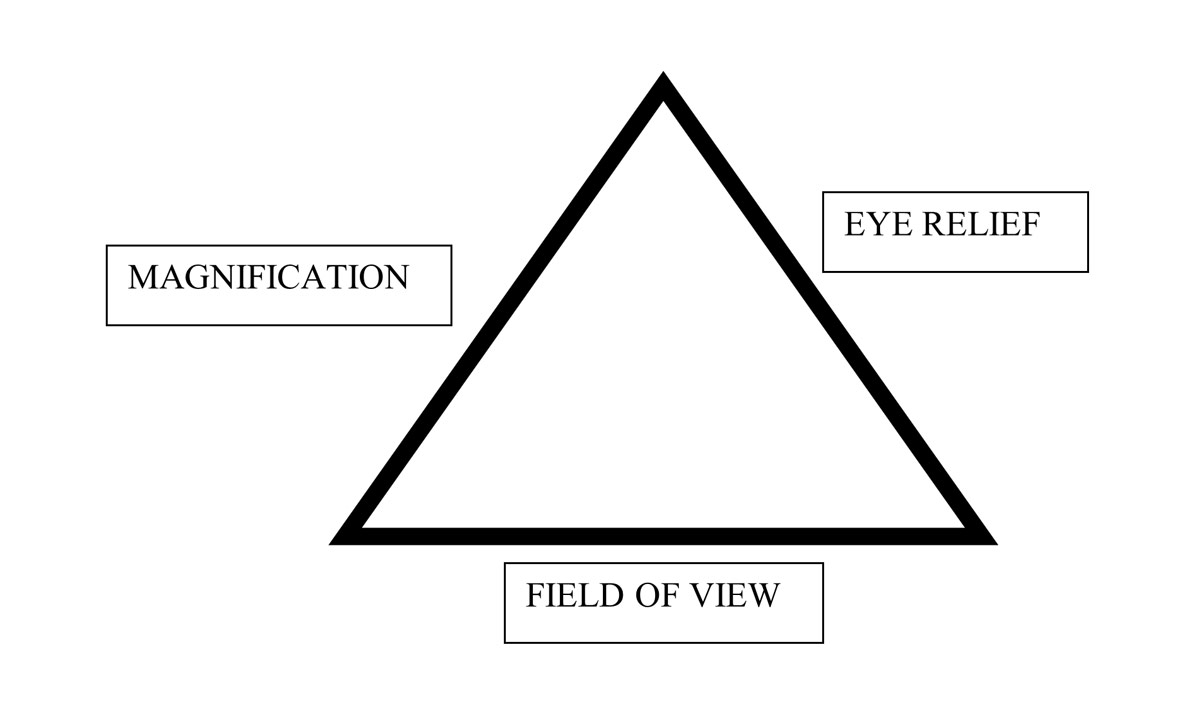 Alter any one of the three sides of the Optical Triangle, and it will always affect the other two.

As consumers, we might want high magnification, a wide field of view, and long eye relief. And while an optics company would love to give it to us, that wish will stay unfulfilled. The optical triangle demonstrates that if we increase a scope's magnification, the shooter's FOV, or field of view, will shrink. Sure, we can increase the field of view by dropping eye relief to zero (like a spotting scope), but that would put the ocular lens dangerously close to your eye when we pulled the trigger on a rifle with any amount of recoil. It's not a practical solution. 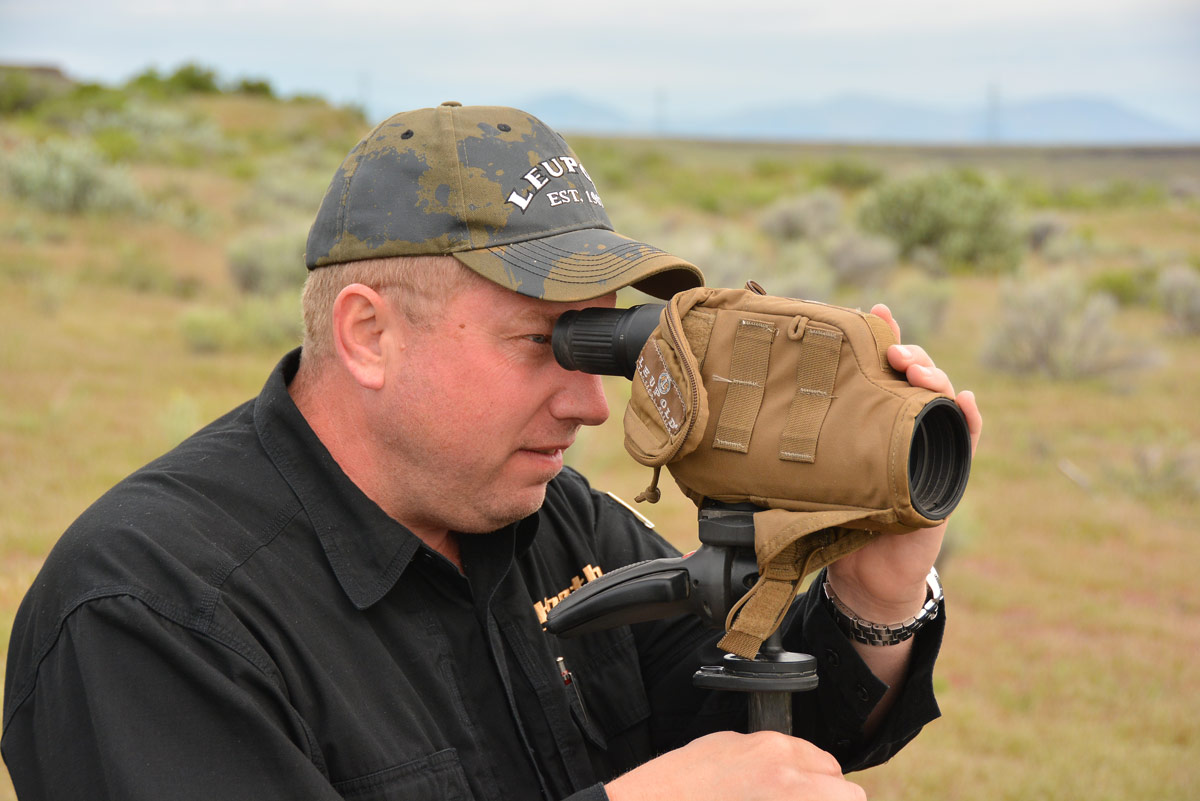 Optical designers must make trade-offs when designing a scope, and we must make similar trade-offs when we buy them. Therefore, scopes built for hunting dangerous game are low-powered, thus, having a wide field of view and long eye relief. I've been whacked on the forehead by a rifle scope several times (no blood yet). I know that long eye relief is a critical factor in scoping a heavy recoiling rifle or even a moderate recoiling gun which may be shot from difficult or unconventional positions. Shooting uphill at a steep angle, for example, is one position where scope-cut happens regularly.

However, eye relief is not nearly as critical for a rifle with a mild recoiling cartridge, equipped with a muzzle brake or suppressor, and sporting a beefy barrel and chassis. In that case, a consumer may want to look at magnification and field of view as more important. For example, an F-Class competitor might view magnification as the most important, while a PRS shooter may lean toward a wide field of view to help locate targets quickly. Priorities should be based on a shooter's personal needs.

All rifle scopes are a compromise between eye relief, magnification, and field of view.

Pro Tip: Consider a level on your magnification ring to adjust magnification up and down for a wider field of view when looking for your target. 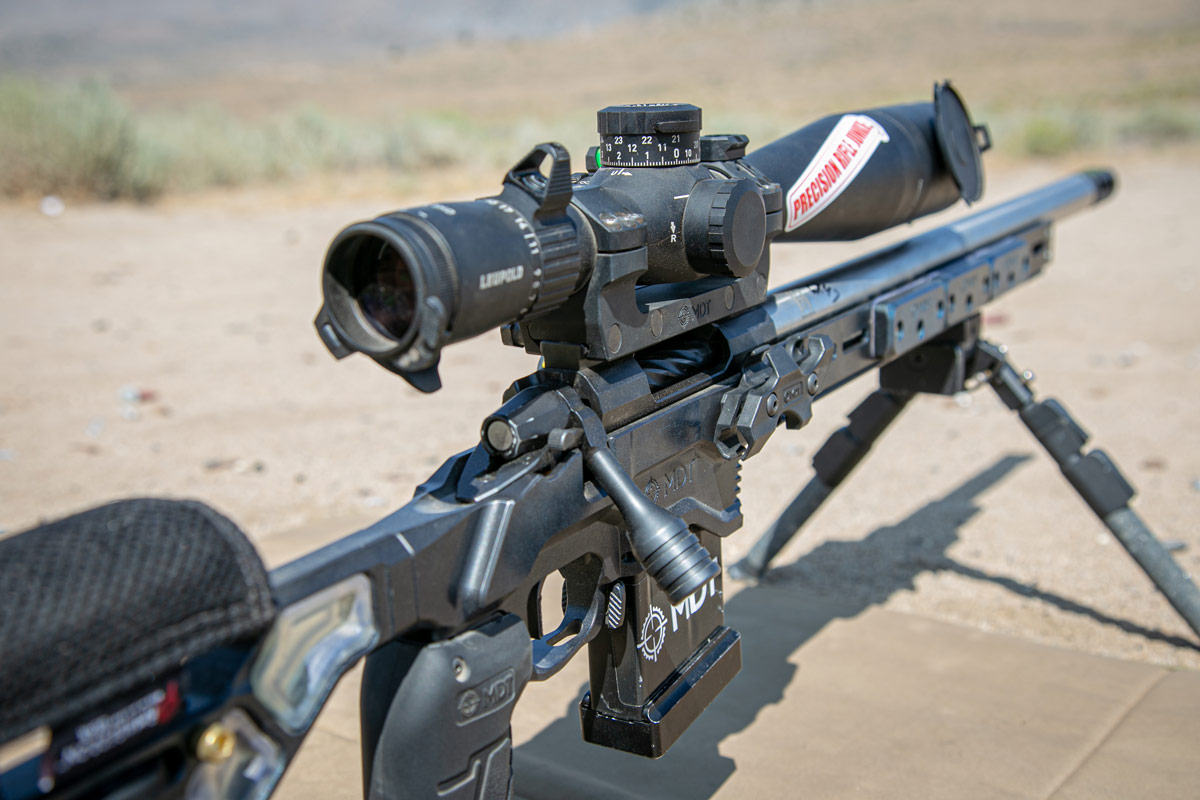 We all love high magnification rifle scopes, but to have a workable eye relief on even a mild recoiling rifle, we sacrifice field of view. If you need to find a target quickly because the clock is running in competition, or that animal you're hunting is headed for parts unknown, a large field of view is necessary. That means dial down to a lower magnification. Want long eye relief for your magnum rifle? You'll have to sacrifice one of the triangle's other two sides. There's no free lunch. Consider your needs and applications and adjust your purchase accordingly, and spend some time learning how to maximize your system.