Editors Note: This is an updated version of "MDT LSS-XL GEN2 SHINES DURING BACKCOUNTRY HUNT IN NEW MEXICO," which was published on March 25th, 2019.

Once you get used to the modularity and comfort of a chassis rifle stock, it is hard to return to a traditional stock. The modularity of rifle chassis systems cannot be understated. Multiple QD attachment points and M-LOK slots for rails and bipod and tripod attachment all lend themselves to a system tailored to the individual shooter. Rifle chassis also feature adjustable combs and length of pull, which allow an end user to achieve a perfect fitment. This adjustability can be quickly tailored for a different shooter, so one rifle can be used by multiple people with different body types or craniofacial anatomy. Instead of purchasing several rifles, money can be applied towards better optics, ancillary gear, and ammunition for training.

I have used chassis for my rifles since they hit the market, and I always noted how a chassis would be the perfect platform for a hunting rifle. Over the years, we have seen a trend of chassis getting both lighter and more compact. Although I had used a chassis rifle for hunting coyotes and pronghorn antelope at our ranch, I never used one to hunt big game in the mountains. For some time, I wanted to build up a chassis rifle and go for a long walk in the woods with a heavy pack. Since my spouse and I were expecting our first child right in the middle of mule deer season, I did not enter the draw to obtain a license in my home state of New Mexico. My best friend and shooting partner Mark, however, did draw a deer tag. I was anxious to explore the idea, so I offered to rebuild his rifle with an MDT LSS-XL Gen 2 chassis and help prep for his hunt. He agreed, and we got to work.

Since this article was first published, MDT has released three dedicated chassis systems for hunting.

BUILDING A HUNTING RIFLE WITH AN MDT LSS-XL GEN2

Mark's rifle started life as a Remington 700 AAC-SD chambered in .308 Winchester. Out of the box, the rifle was capable of sub-moa accuracy. Over the years, Mark upgraded the Hogue overmolded stock to a Bell and Carlson Medalist. That configuration worked for several years until one day, Mark got behind my Howa 1500, mated to an MDT LSS XL Gen 2. The rifle was configured for my large frame, but after adjusting the comb and length of pull, Mark was hitting a 12-inch plate at 1,000 yards with Hornady 178 ELD-X Precision Hunter rounds. He walked away impressed with the setup, and I knew it would take little convincing to rebuild his Remington 700 to match my Howa 1500.

Several weeks after agreeing to upgrade his rifle, Mark and I were at my workbench, dropping his Remington 700 into an MDT LSS XL Gen2. Ten minutes later, his rifle was ready to go. For ancillary accessories, we attached a QD mount for his sling, a small M-LOK bipod adapter, and a small ARCA plate for my tripod.

More: Is the .308 Winchester Still Relevant?

To prepare for the hunt, Mark and I spent many hours shooting steel targets at my family's ranch in Central New Mexico. The first step of preparation was to select the correct ammunition and set a good 100-yard zero. Since we were using a precision rifle, we wanted match-grade ammunition designed to expand upon impact. From experience, we both knew that Hornady 178 ELD-X Precision Hunter would be very effective on mule deer. After proning behind his rifle, Mark adjusted the comb height and length of pull. He dry-fired his rifle several times, then loaded up live rounds. Within five shots, he had a solid zero.

More: How to Zero a Rifle 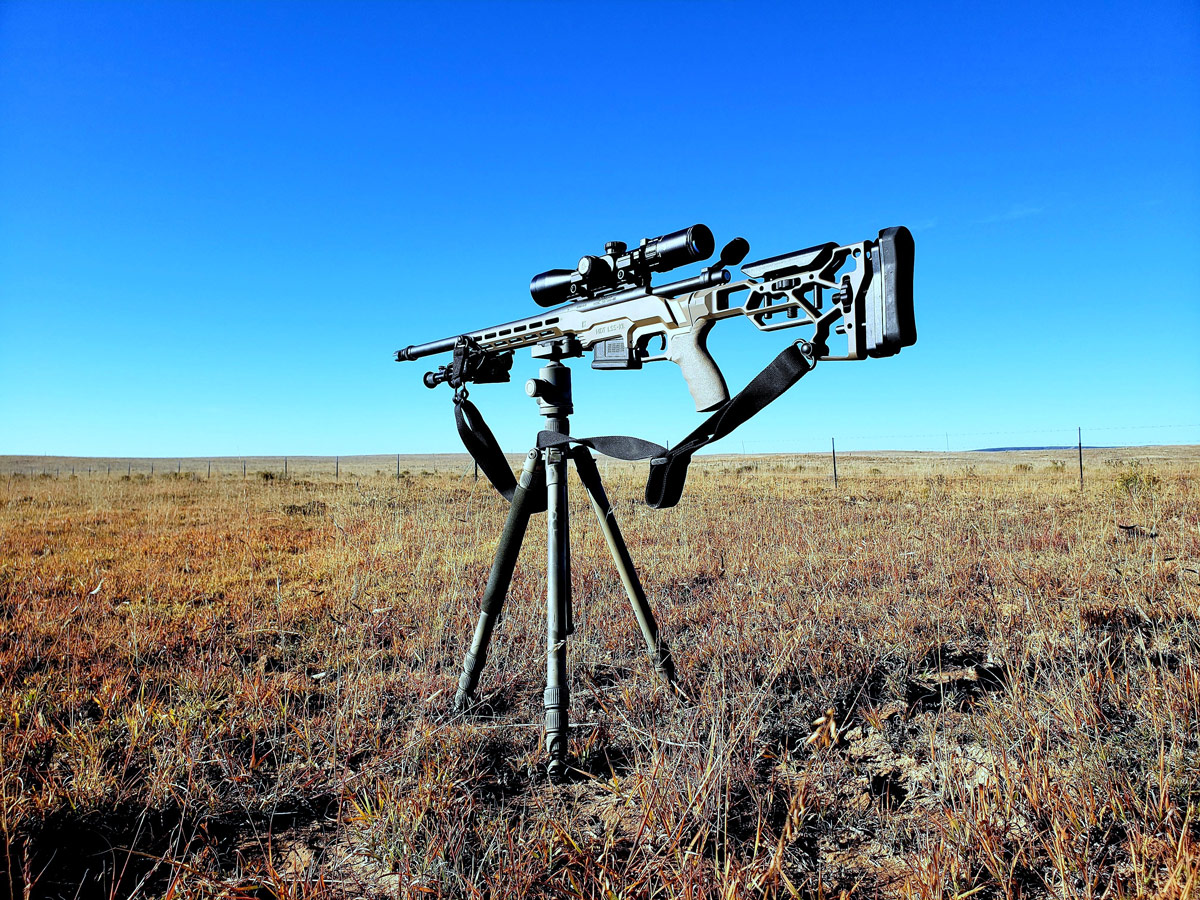 We attached a Magneto Speed chronograph and fired another five rounds to ascertain velocity. Driving out to my 1,000-yard range, Mark hung a series of steel targets. I built out a ballistic profile for Mark's rifle in the Applied Ballistics Software on my smartphone. We drove to the 400-yard line and set up our firing position. With Mark proned out behind his rifle, I took a wind reading off my Kestrel and plugged the data into Applied Ballistics. I gave Mark his holds and settled in behind my spotting scope. He fired, and I observed a solid hit dead center of the steel target. He fired two more perfect shots, then sat up and attached his rifle to a small carbon fiber tripod we would take on our hunt. Mark sat crossed-legged, then placed a hunting pack on his lap. Getting a steady position, he fired several shots in the sitting/tripod-supported position and had a 100% hit ratio. Moving back to 600 yards, Mark had a 100% hit ratio both prone and sitting/tripod supported. We drove back to 800 yards, not because we planned on harvesting an animal at this range, but because I wanted to true his ballistic data. Setting up at 800 yards, Mark fired a shot and was a MIL low. I had him hold an extra MIL and observed a solid impact. He fired three more rounds and had a 100% hit ratio. I adjusted the ballistics calculator to match what we were seeing. Mark took several shots off the tripod, and we called it a day. 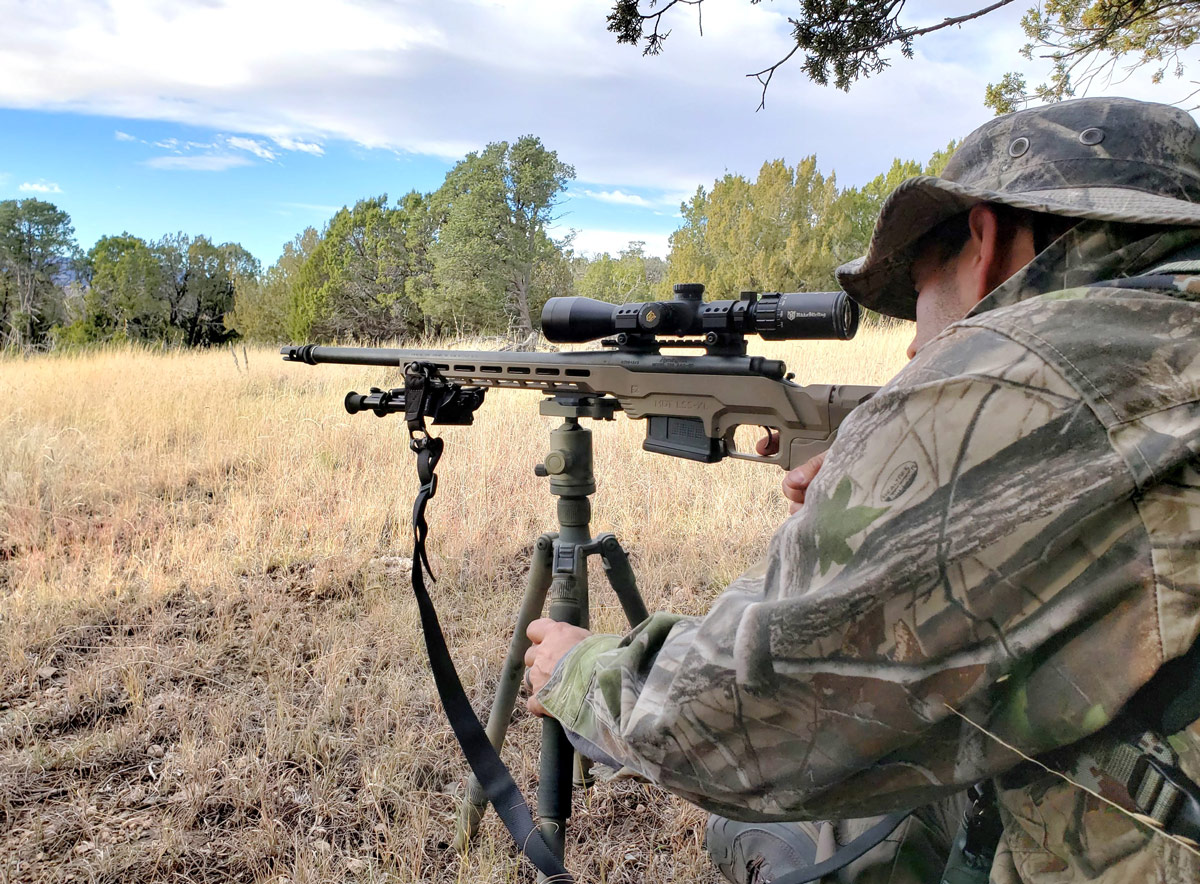 Why train to 800 yards? In a word, confidence. If you can shoot a 10-inch gong at 800 yards, shooting a mule deer at 200 yards is a piece of cake. Mark and I agreed that 600 yards and closer was ideal, though we would strive to get as close as possible.

Our hunt occurred in the Lincoln National Forest near Capitan, New Mexico. With only two days to hunt, we felt a sense of urgency. After work on Friday night, Mark and I drove to the National Forest north of Capitan. We loaded our packs, turned on our headlamps, and hiked several miles into the National Forest. We set up camp, enjoyed a few sips of whiskey, and fell asleep in our tents. Temperatures that evening dropped to a balmy 20 degrees Fahrenheit/-6.6 Celsius. We woke at 4 am on Saturday, hiked another few miles, and waited for the sun to come up. After hours and hours of glassing, we saw a lot of female deer and several young bucks, but nothing we could shoot. Around 4 pm, we heard the dull roar of what sounded like a biker gang of ATVs. Glassing the mountain, I saw several hunters completely camouflaged, glassing through their riflescopes. One hunter, in particular, looked at us through his riflescope without seeing us. I pulled out an orange hat, Mark and I exchanged a knowing glance, and we returned to camp. Time to pack up, hike out, and find another spot to hunt. 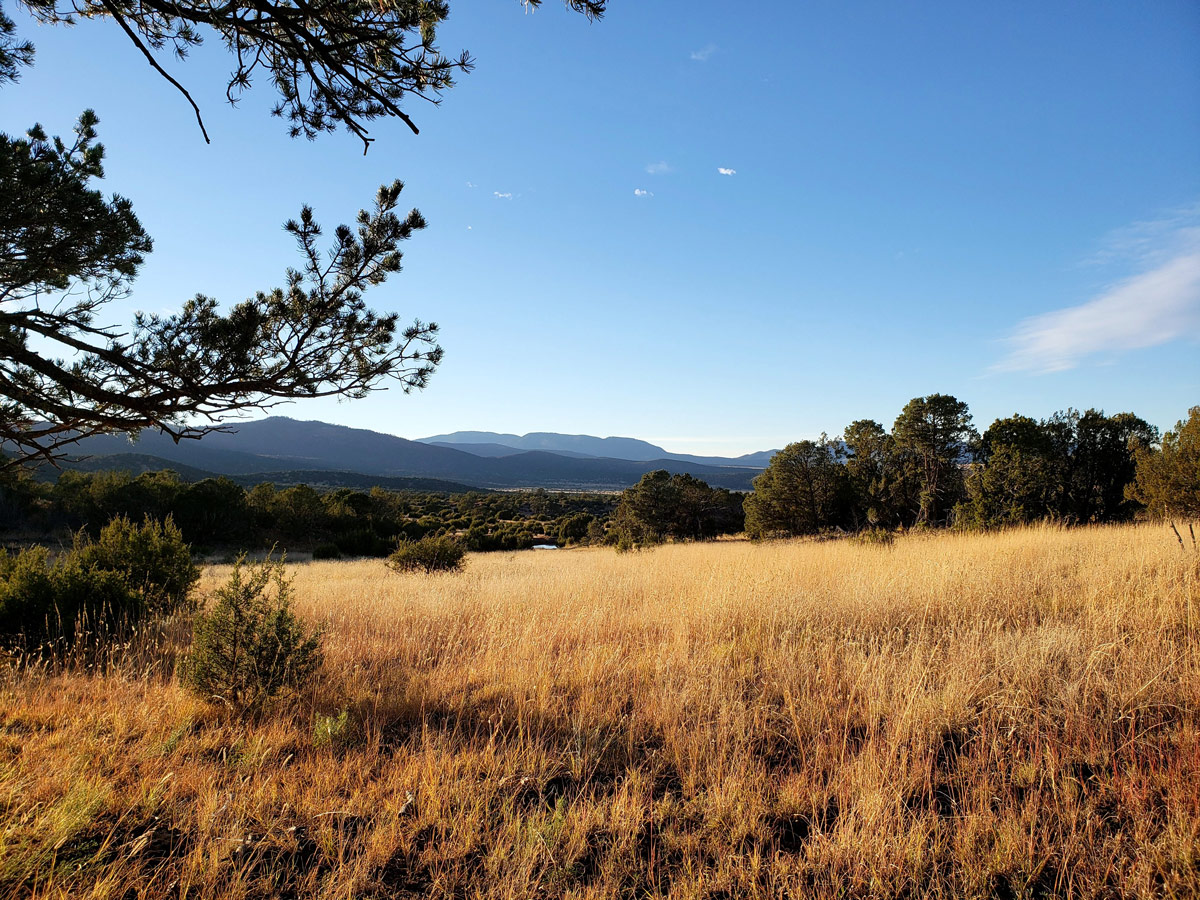 Cedar and pine forests present a lot of opportunity for long range shooting.

We drove back to Capitan and spent the night with family who had brought out an RV. After a shower and a nice meal, we rolled out our sleeping bags and fell asleep. We again woke at 4 am, grabbed coffee, and drove out to a rocky canyon my family has been hunting for a hundred years. We waited until shooting light, then hiked our way up the canyon. At the top, we first smelled and then heard a small group of deer picking their way up the canyon. We heard them move to the adjacent canyon and quickly and quietly followed, repositioning ourselves at the top of the canyon. We used trees to cover us as we crested, then dropped and skirted a ridge to secure a commanding landscape view. Settled in the shadow of a red cedar tree, we saw a small herd of deer making their way back to the top of the canyon. Mark braced his rifle over a dead cedar branch and loaded his weight into the rifle.

Mark aimed at a buck lagging behind the group. I heard the concussion of his rifle, then saw the deer collapse. Mark cycled the Remington 700, and I looked for signs of movement. Nothing. We sat in the tree's shadow for 10 minutes, then cautiously approached the deer. Mark had taken a perfect headshot. The Hornady 178 ELD-X had entered the base of the skull and blown out the other side. We shook hands, then gutted the deer and carried it down the mountain, loading it in the bed of Mark's truck. We drove into Capitan and bought bags of ice to pack the animal's internal cavity. We returned to Mark's mountain home outside of Albuquerque. We cleaned up, processed the deer, and loaded everything in the freezer.

Persistence, patience, training, and solid gear won the day. Due to the modularity of the MDT LSS-XL Gen 2, we would have had the tools to handle any scenario that presented itself. 500-yard cross-canyon shot? Easy: prone out and get it done. Hanging off the canyon shooting at an angle? Clip into the tripod, get steady, and take the shot. Deer in the timber at 70 yards? Wrap into the sling and brace against a tree, then take the shot.

What could we improve upon? A full-length MDT ARCA rail would be added to accommodate both the bipod and tripod and allow some flexibility with tripod placement.

What about weight? Yes, the rifle we took into the woods was heavy compared to traditional hunting rifles, but a good sling mitigates perceived weight and makes the rifle more comfortable to carry. While we hiked, Mark's rifle was secured to his pack. In his words, he "didn't even notice it was there." If we were going to walk 15+ miles in pursuit of Elk, we would have used a carbon-wrapped barreled upper or a thin profile barrel, but the MDT chassis is the last thing either of us would have given up to cut weight.

Thomas Gomez is the founder and C.E.O. of High Desert Rifle Works. He has over twelve years of experience in the Healthcare, Tech, and Outdoor Industries, working as an analyst, researcher, consultant, technical writer, and program manager. Thomas has an M.B.A. from Western New Mexico University, numerous armorer certifications, and teaches precision rifle for Q Pro Defense. He spends his free time ranching, farming, fly-fishing, and hunting the high deserts and mountains of his native New Mexico. He can be reached via Instagram @highdesertthomas.